Vucic: I did not talk about recognition, it's not my topic

Alekandar Vucic said on Wednesday that he told Italy's ANSA agency "what he talks about publicly every day, and did not speak about recognizing Kosovo."

Vucic: I did not talk about recognition, it's not my topic

Alekandar Vucic said on Wednesday that he told Italy's ANSA agency "what he talks about publicly every day, and did not speak about recognizing Kosovo." 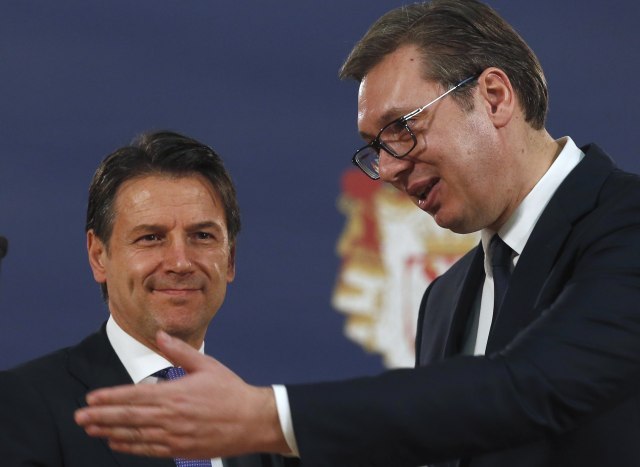 This was Vucic's response when asked "what exactly what he said in his interview with the Italian agency regarding the solution for Kosovo."

The constant launch of this topic is in the interest of Albanians from Kosovo, he added, adding that that he "does not see to whom it could still be interesting except to Albanians, as well as to fake Serb patriots."

He also said that he was "not someone who could exclude any topic of conversation, nor forbid anyone to say what thy wanted."

Vucic stressed that he was "fighting for the people, and this is visible, it is recognized, because he received 80 percent of votes from Serbs in Kosovo."

"And the Serbs in Kosovo and Metohija do not live in heaven, but on the ground and they know what problems they have," Vucic noted.

"Look for peace, rather than reasons for conflict"

It is important to search for peace and compromise, rather than for reasons for conflicts, and Serbia is prepared for discussions with Pristina that might lead to a solution by agreement in the future, Serbian President Aleksandar Vucic said after a meeting with Italian PM Giuseppe Conte Wednesday.

At a joint press conference, Vucic said he had informed Conte of Serbia's positions on Kosovo-Metohija and added Serbia was prepared to continue dialogue as soon as Pristina's taxes on Serbian goods were scrapped.

"Today we reaffirmed our good bilateral relations, the 140 years since the establishment of diplomatic relations and a strategic partnership between Serbia and Italy," Vucic also said.

Italy has always supported, and will continue to support, Serbia's EU and reform paths, he said.

The economic ties are improving every year, he said, adding that the bilateral trade volume had exceeded 4.32 billion euros for the first time ever

During the same news conference, Vucic said that he and Conte discussed "relations with Pristina in detail."

He added that he told the Italian prime minister that Serbia's position on this issue is "very difficult."

Still, the president added, Belgrade will not enter the EU without an agreement with Pristina, nor will there, in that case, be progress on that road for Pristina.