"It's my duty to explain to Serbs importance of compromise"

Serbian President Aleksandar Vucic ha told Italy's ANSA agency that a compromise must be reached before solving the Kosovo problem.

"It's my duty to explain to Serbs importance of compromise"

Serbian President Aleksandar Vucic ha told Italy's ANSA agency that a compromise must be reached before solving the Kosovo problem. 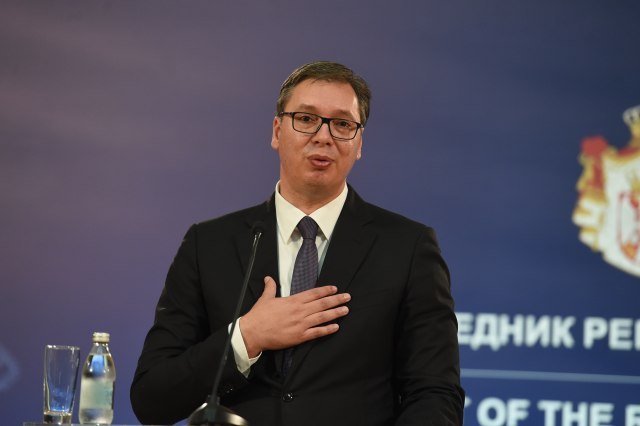 However, Beta agency said that this statement was included "in the first version of the interview" - but that ANSA "decided later to leave this sentence out of it."

Vucic is also quoted as saying that the issue of "border changes" was "a controversial topic - since not everybody recognizes the same borders, depending on whether they recognized Kosovo or not."

"Unlike Kosovo leaders who deceive their citizens every day with unrealistic promises that Pristina will get everything, and Belgrade nothing, it is my duty to explain to Serbs the importance of compromise (with Pristina) which does not represent a defeat but a victory. A victory for the future of Serbia," said Vucic.

He denied that he had ever had secret meetings with Kosovo President Hashim Thaci, as some media claimed, and described as "pure lies" the allegation of the existence of a draft of a final agreement between Belgrade and Pristina.

He reiterated that Belgrade will not continue the dialogue with Prishtina until the Kosovo authorities abolish the 100 percent taxes on goods from Serbia and Bosnia-Herzegovina.

"Unless there is a compromise agreement on Kosovo, it will be a disaster. Although everything seems difficult and sometimes impossible, we are determined to reach a compromise, I am sure that we can come to a solution with the help of our European friends and with the support of Russia, America, China and others countries," said the president of Serbia.

He pointed out to "the cautious and responsible approach of Belgrade which did not respond to he maximalist and provocative measures of Pristina in order not to endanger peace and stability in the region."

Vucic also said that he appreciates the mediating role of the head of European diplomacy Federica Mogherini - unlike Pristina, which is critical of Brussels.

"The problems are between Serbs and (Kosovo) Albanians, I can ot criticize Europe that has done everything it can preserve peace," Vucic said.

Speaking about Serbian politics, Vucic said that (weekly) protests against his authorities are a democratic right and can continue "as long as there is no violence and conflict.

"Every year we see protests and demonstrations, let them protest freely," Vucic said.