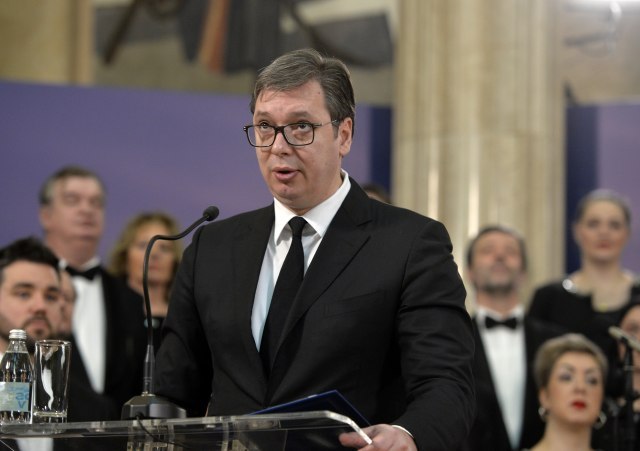 "I believe in someone’s legacy, that’s what I would like to see," he is quoted as saying.

He also "stressed that a deal had to be done, Otherwise we'll face a catastrophe."

In an article headlined, "On Kosovo: 3 presidents and a prime minister" - that included Vucic, Hashim Thaci, Ramush Haradinaj, and, Milo Djukanovic, the segment dedicated to the Serbian president is entitled; "Aleksandar Vucic: Looking for a legacy."

According to the website, he made clear he won't go back to the negotiating table until Kosovo lifts 100 percent tariffs imposed on Serbian goods last November, "in response to Belgrade’s efforts to block Pristina’s membership of police agency Interpol." But if the tariffs are scrapped, he said, he would go “immediately back to Brussels” to resume dialogue.

But if these taxes - increased by 100 percent and targeting goods from central Serbia and Bosnia-Herzegovina - were to be scrapped, Vucic said he would "immediately back to Brussels to resume dialogue."

"Informed that Haradinaj, the driving force behind the tariffs, had said they would only be removed once a final deal is reached, Vucic replied: 'I thought that he was irresponsible but not that irresponsible'," Politico writes.

Vucic also "called for outside powers to exercise 'positive pressure' on all sides - making clear they want to see a deal and offering incentives to help bring it about. But he said: 'It’s more about us, Serbs and Albanians, to tell you the truth'," the article went on.

Vucic is also quoted as saying that the two sides "have to be free to discuss where to draw a common border" - even though, Politico remarked, "talk of a possible land swap has triggered condemnation in the region and split international powers."

According to this, Vucic has played down EU's enthusiasm for the idea that the North Macedonia deal could generate momentum for a settlement between Serbia and Kosovo.

“It shows that Europe needed some good news, more than it is very much relevant regarding the situation between Belgrade and Pristina,” he said.

The piece starts with a description of a panel debate in Munich where Vucic and Thaci participated, saying that their acrimonious exchange was "the good news."

Both Thaci and Vucic "said their bad-tempered exchange was useful because it buried any false hopes that they will reach a quick agreement - still, they face strong Western pressure to push ahead," the website said.