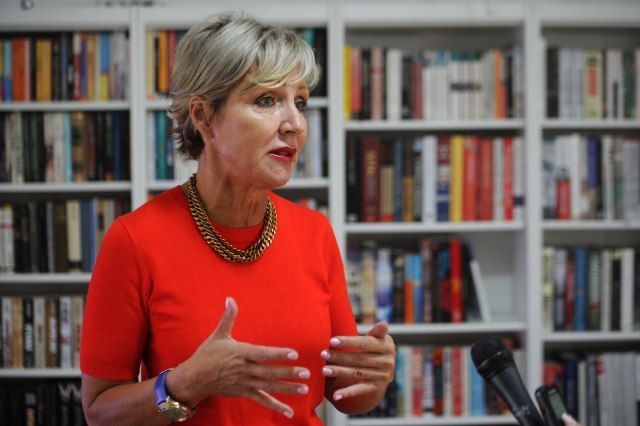 She told Voice of America (VOA) that the protests against Serbian President Aleksandar Vucic weaken the position in Belgrade, although at the moment it seems that Pristina is losing support.

She recalled that precisely because of the tax on goods from central Serbia, the United States is warning Pristina by not sending a high official would to the marking of the self-proclaimed independence of Kosovo.

According to her, this may be one of the most explicit messages of the US administration sent to Pristina regarding their, as she stated, very unreasonable decision to impose taxes on goods from Serbia and Bosnia-Herzegovina.

"I think the delay in the dialogue has now really provoked the US administration to a level, that it remains questionable, if NATO complained about the KSF (Kosovo Security Force) transformation, and now you have a cancellation of a visit from the Iowa general, what have you achieved in the last 3-4 month, and I think this is a clear message that security implications in the stalling of the dialogue - bearing in mind all other geopolitical circumstances - are right now on the side of Kosovo, not on the side of Belgrade," Milic told VOA.

According to her, it is obvious that in Kosovo there are many more problems currently in the process of establishing a consensus, above all of the ruling elite, which can relatively easily convince its citizens.

Milic recalled that two weeks ago Prime Minister Ana Brnabic met with the head of the Ohio National Guard, the (US) state that is Serbia's partner in strengthening bilateral relations in the field of defense, such as Iowa is for Kosovo.

"During the Prayer Breakfast, the deputy president of the Assembly of Serbia met with the former commander of the National Guard Ohio, Steve Stivers, who is now chairman of the Serbian caucus in the Congress, but not only that, he is also a very prominent figure in the National Republican Congressional Committee, which is extremely important, that we now see the strengthening of Serbia's defense cooperation with the Ohio National Guard and the strengthening of cooperation with NATO, since renewal of the partnership is expected these days," she told Voice of America.

Milic concluded that according to the model of the agreements between Macedonia and Greece, both Belgrade and Pristina should agree - that both sides lose something, in order to gain something at the same time.