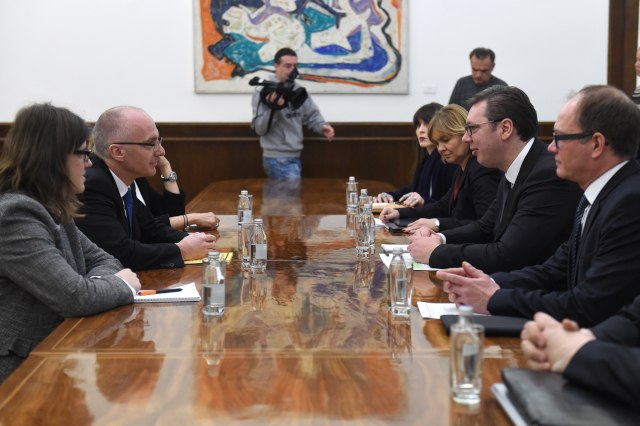 Vucic said he was pleased to have had an opportunity to meet with German Chancellor Angela Merkel again recently in Davos, "because each meeting is a chance to learn something new from her experience and boldness, with which she is leading Germany and Europe."

Vucic and Schieb noted Serbia-Germany relations were at a historic high, which they said was a firm foundation for constant improvement of political dialogue and an impetus to economic cooperation.

Vucic thanked German investors for employing over 55,000 workers in Serbia and expressed the hope the number would grow with further improvement of the country's business environment, the presidential press office said in a statement.

He pointed out that German companies, in addition to providing jobs, "have an influence on the entrepreneurial spirit and work ethics, as well as on the development of dual education in our country."

Schieb said the German embassy in Belgrade was strongly supportive of the current trend of increasing investments, as well as providing assistance in business contacts.

Vucic pointed out to Schieb the consequences the taxes on Serbian goods, as an irresponsible unilateral measure of Pristina, have on relations and stability in the region.

He once again stressed Serbia's readiness to continue the dialogue after Pristina revokes the "unjustified taxes" which, besides the Serbian economy, threaten everyday life of Serbs in Kosovo and Metohija.

Schieb said Germany strongly supports the Belgrade-Pristina dialogue and expressed hope that conditions will be created for its continuation.

He also reiterated support for the European path of Serbia and stressed the importance of chapters 23 and 24 (in EU accession negotiations). In this respect, he praised the work on the development of a media strategy in Serbia.

The interlocutors highlighted the importance of Serbia's participation in the Berlin Process, initiated by Merkel, as this also confirms the country's policy of regional stability.