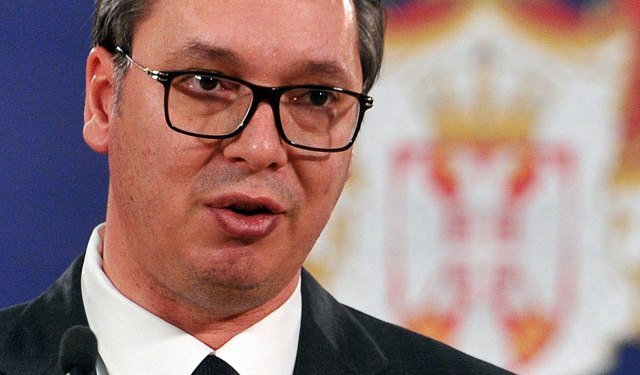 "I've said that a hundred times. I will not play like they did in Macedonia with consultative referendums where the people said they were against, yet pass that in the Assembly. I think it's a good agreement for them, I welcomed it, but the way in which it' been done, I would never do it," the president told Happy TV, apparently referring to the Skopje-Athens name deal.

He added that once a referendum fails, it can only be stated that it had failed, and announce this to the public democratically.

"If there was any referendum in Serbia, if we received 49 percent and the other side 51 percent, it would have been my job to resign and say that the referendum was not successful in accordance with the Constitution and the law, the citizens had decided in favor of some another option. That would have been the epilogue because, you have to respect the citizens," said Vucic.

As he said, the people are the bearers of supreme sovereignty and "you cannot go against the people."

"No one will play with the fate of the people and the state, not in any way, and I am grateful to the (Serbian Orthodox) Patriarch Irinej for his rational and serious stance that understands our pain on Kosovo and Metohija, but also the pain of our people in the RS (Serb Republic), Croatia, Montenegro," said Vucic.

He noted that because of this, individuals also found the patriarch to be "a bot" - one who should "hang on Terazije (Square)."

He noted that Patriarch Irinej was acting seriously and that his job was not to ingratiate himself to anyone, but to be responsible.

Vucic said that he respects those who think differently.

Speaking about pressure coming from world powers regarding Kosovo and Metohija, Vucic said that "somebody cannot call him and try to give him orders, because they know that they cannot talk to him that way."

"They know that Serbia is not as weak as in 2008 or 2010. On the other hand, we do not act arrogantly, we respect international legal principles. We understand reality, the essence is to protect our interests, to protect our people in Kosovo, if we don't want to do it, who will. The Albanian leadership showed that they did not care about the Serbs, they showed that they want the Serbs to leave Kosovo and Metohija," Vucic said.

He added that he was "convinced that we will have many more problems with this, but precisely for that reason it is important that we respect each other, no matter how different our positions are."