Ivica Dacic spoke for Prva TV on Wednesday - without confirming that he is one of those who know what the Serbian plan to solve the Kosovo problem is.

Ivica Dacic spoke for Prva TV on Wednesday - without confirming that he is one of those who know what the Serbian plan to solve the Kosovo problem is. 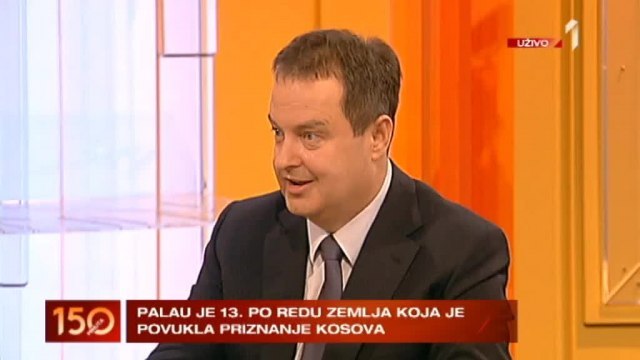 "There should be some talks about that... There have never been detailed discussions, I mean during the dialogue with Pristina. President Aleksandar Vucic presented an idea, that is, the principles that should be discussed - but as soon as that became public, somehow the dialogue stalled," said Dacic.

When the interviewer, Maja Nikolic, remarked that the idea had not been articulated in the clearest of terms - Dacic said that the public had heard the principles, whose aim was to finding a compromise solution.

"I've been talking about it for many years, that some sort of this separation line should be determined. The interpretation of those countries that have recognized Kosovo is that it has its own borders, while our public, and the Constitution, say that Kosovo is a part of Serbia. There are two basic solutions: one that Kosovo is independent, and ours is that Kosovo should have the highest degree of autonomy within Serbia. Neither of these solution is acceptable to both sides," Dacic said.

Asked if the topic of "delimitation" was on the table - the minister replied: "There's no table for it to be on."

"No further step has been made at all, to talk about anything concrete," Dacic said.