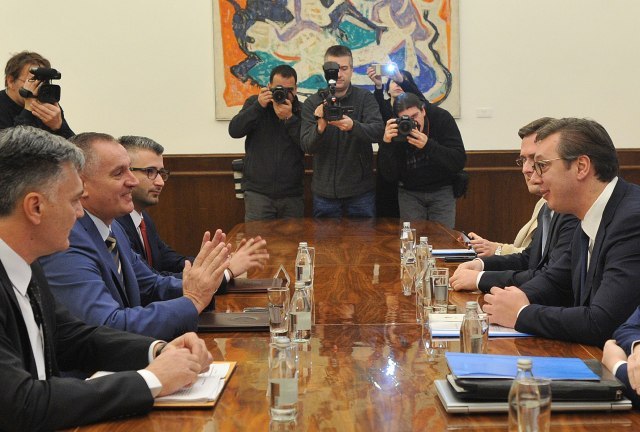 "Serbia will always, respecting the Dayton agreement, support various infrastructure and other projects in the RS, as well as joint work to foster our cultural and spiritual ties," Vucic emphasized.

He said that, for the sake of economic prosperity and realization of joint plans, it was most important to preserve peace and stability in the RS and in Bosnia-Herzegovina.

Vucic wished Viskovic a lot of success in his responsible role, with the belief that he will work selflessly to ensure prosperity for the citizens of the RS.

The RS prime minister said he was looking forward to substantial and intensive cooperation with Vucic and the government of the Republic of Serbia, and that he expect a new joint session of the two governments to take place soon.

He pointed out that Vucic was "the first president of Serbia to move from words to deeds" because he fulfilled his promises and helped build various facilities and infrastructure projects in the RS, but also in the Muslim-Croat entity, the Federation of BiH.

Viskovic thanked Serbia for its assistance so far and said that he was rejoicing at each of Serbia's successes, because a strong Serbia represents a strong support for the RS.