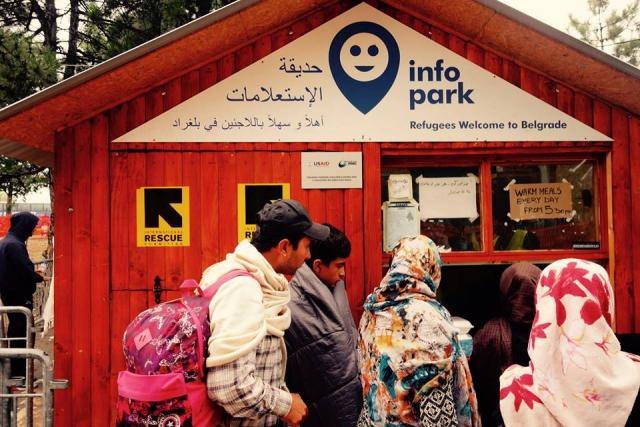 The International Migrants' Day, which we are marking this year with worry about the bitter cold, heavy snow and very difficult weather conditions, is a good time to ask ourselves how are the refugees and migrants doing now that they are in transit between their homes that they most likely had to leave, and their future destinations they are heading for seeking safety, protection and the chance to rebuild their lives.

On this occasion, Info Park wishes to remind everyone of the universality of human rights, that is, the right of every individual, regardless of the country of origin or legal status, to the basic human dignity that is shaped in the normal life with everything that allows normal living standards and conditions. The hazards that refugees and migrants, as well as the organizations that help them, face daily from the beginning of the crisis, which exploded in 2018 include: the spread of false news, fabrication of data, and the violence that is unfortunately becoming increasingly frequent on the borders of the European Union.

This is particularly true for about 40 million migrants who are undocumented and are trying to find some form of protection in any way possible. Unresolved status does not imply denial of rights. This was confirmed this year by the signing of the Marrakesh Migration Agreement, which should allow for the first time after 1990 the preservation of the rights of the migrant population.

Due to the unclear attitude towards migration as human rights, we can often hear that the world is dealing with an orchestrated migrations aimed at endangering the safety of European citizens and introducing population imbalances, which is increasingly repeated in the media and even in the parliaments. In Serbia, right-wing political parties increasingly resort to false interpretations of the migrant crisis.

There are currently more than 4,500 refugees and migrants living in Serbia who are mainly accommodated in reception and asylum centers. The situation has improved, but it is increasingly unlikely that they will continue their journeys. A large number of them continue to try, and attempts are hampered by very often illegitimate violence inflicted by border police in the region. Violent prevention of irregular entry is in conflict with the right to temporary protection and the right to seek asylum.

In the last few days the region was hit by a cold weather front and a large number of migrant remain outside the official system, thus not receiving the necessary care and aid. They often return from unsuccessful attempts to cross the border in need of additional protection and assistance. The International Migrants’ Day for them is, unfortunately just another day like others over the last three and a half years in which they keep trying to reach their goal - a dignified life.