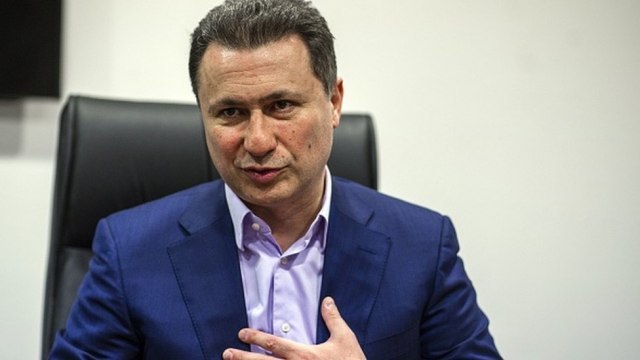 Both his private and diplomatic passports had been seized by authorities in Skopje last year - so the question now remained of how he managed to reach Hungary at all.

Belgrade-based daily Politika writes that it learned Gruevski used a fake passport to cross the border from Macedonia into Albania by night, and illegally enter Tirana, where he was accepted by employees of the Hungarian embassy.

Then he took the first morning flight that the Malev carrier runs between Tirana and Budapest, and once in the Hungarian capital, sought asylum.

According to the newspaper, Gruevski "wore a disguise" while on the airplane - a pair of sunglasses and a hat - and the crew were unaware of the identity of the passenger - "because he did not remove either the sunglasses or the hat during the whole flight."

By the time the arrest warrant against him came into force, around 10:00 CET, Gruevski was already in Budapest.

The office of Hungarian PM Viktor Orban on Tuesday confirmed that Gruevski had applied for asylum, seeking refugee status, and that the application is being considered "exclusively as a legal issue."

"Politika writes that Gruevski escaped from (via) Tirana, on a Malev flight to Budapest, (a company) that no longer flies nor exists. It's a sad attempt to deflect from the fact that Gruevski had to have passed through Serbia, and that he had to have been aided by the Serb authorities in all that," says Petreski.

Via Albania, and Montenegro

Later on Thursday, according to Macedonia's MIA agency, the police in Tirana confirmed that Gruevski traveled to Hungary through Albania.

Albanian media write that the police announced the former prime minister had crossed the border crossing Han i Hotit, and that, as they said, they did not have information that there was a warrant against him.

It was stated that on November 11, Gruevski "crossed to Albania across the border crossing Han i Hotit to crossed into Montenegro."

The police said Gruevski, who was at Macedonia's helm from 2006 to 2016, was in "a car belonging to the Hungarian embassy in Tirana, with number plates CD 1013A."

The Macedonian authorities have previously stated that they did not know how Gruevski left the country.

The Montenegrin police late on Thursday confirmed that Gruevski entered and exited that country on November 11.

Agencies previously reported that the Hungarian government confirmed Gruevski attempted to seek asylum in a Hungarian representative office outside of Macedonia, and stressed that Budapest had nothing to do with Gruevski's exit from his country.