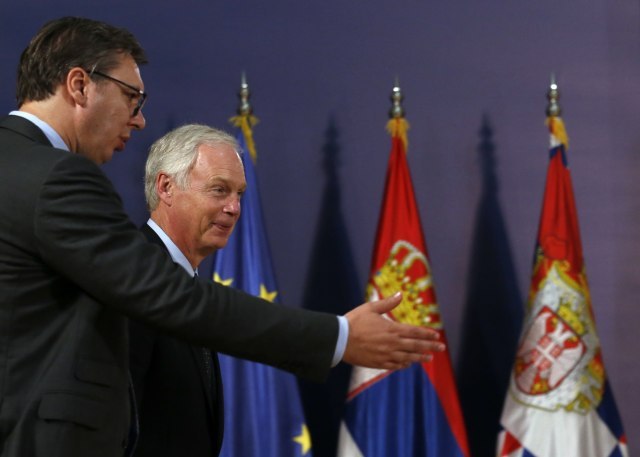 The president said that he also talked with the US senator about the improvement of bilateral cooperation between Serbia and the United States, and informed him and the situation in Kosovo.

Responding to journalists' questions about reaching an agreement between Belgrade and Pristina, Vucic said:

"I do not think there is a solution either without the United States, or without Germany or Russia. Any agreement is very difficult, terribly difficult, almost impossible to achieve, but we should do our best. If something like that were to happen by any chance it would be very important that all the great powers support it. I think that big powers should, first and foremost, give impetus to the talks."

He stressed that Russia "has always been on our side".

Ron Johnson told reporters that his country would be imposing any solutions for Kosovo, and that both US President Donald Trump and his VP Mike Pence want the problem of Kosovo to be solved.

"The American people wish Serbia to be successful, we wish peace, security. We wish a stable situation, we wish prosperity. We won't be imposing any solutions for Kosovo, providing President Vucic with some room to find a flexible solution instead. You have a courageous leader. He wants the best for his people, I will give my best to support people in Serbia and Kosovo who wish peace and stability," Johnson said after his meeting with Vucic.

He also thanked the hosts for their hospitality and congratulated the Serbian people on economic progress.

Answering a question, Johnson said there was always a possibility of US President Donald Trump visiting Serbia.