Vucic: "I almost cried when I saw them"

Vucic: "I almost cried when I saw them" 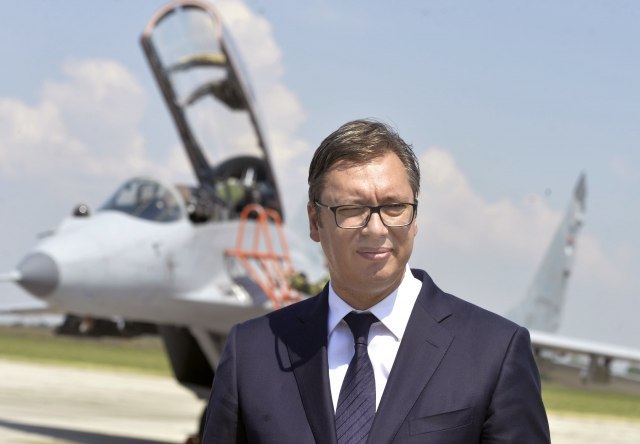 "For the first time we see the strong wings of Serbia, the first two we got from Russia that went into operative use today. Russian and Serbian experts are working on six more MIG-29 planes and for the first time we will have eight MIG-29s on our military parade and we also have three MIG-21 planes", Vucic said.

"I almost cried when I saw and heard them, I don't know about you?" he pointed out and added that he wanted for MIG-29s to be named after "our heroes who defended our country against the NATO aggression, the names of - Milenko Pavlovic, Zivota Djuric, Zoran Radosavljevic.."

"We have here today Colonels Krnjajic and JOkic, who know what they're entering, what kind of machine that is, what they protect and guard... they are guarding the citizens of Serbia, guarding our land." Vucic said.

Prior to that, Vucic went to see the six additional MIG-29s on Batajnica airport that are being upgraded "which means that makes eight planes that will fly for the first time in the military parade taking place at the beginning of November in Belgrade".