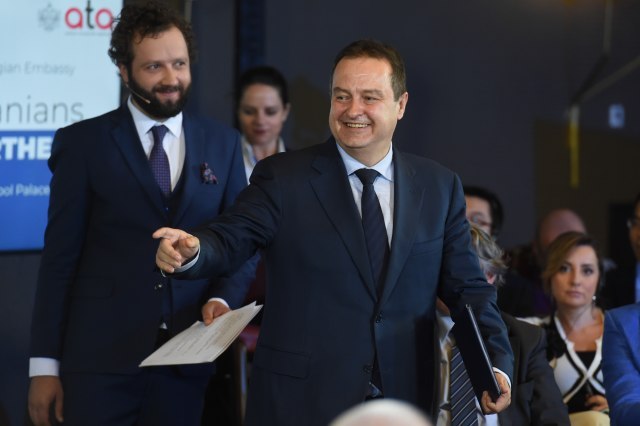 The positions of Russia has changed by it becoming a great power, and one that now much closer to Serbia than it did 20 years ago - while the United States and its foreign policy have also changed, according to the minister.

According to him, the opportunity for dialogue has opened, Serbia has achieved closer relations with Germany, France, as well as with Turkey, white it has become China's strategic partner.

"At this stage, we have a situation where the EU is also realizing that Albanians are the problem in reaching a compromise. Albanians want us recognize us, plus if they could take Medvedja, Presevo (municipalities in the southern part of central Serbia)... that would be ideal for them. In that situation a possibility of a compromise solution opens up. If we already have a dialogue, you have to have a proposal in that dialogue," Dacic told TV Pink, according to Tanjug.

He said he believed that the new US Assistant Secretary of State Wesa Mitchell was a key event that changed Serbia's relationship with the US administration.

According to Dacic, Mitchell was the first representative of the US administration who was interested in the problems in the Balkans and was willing to "listen to us and to have understanding for our positions."

"In that sense, it is important that all representatives of the US administration have such an approach that the problem of Kosovo has not resolved, that is, that there should be an attempt to reach a compromise in the dialogue that would be in the interest of all parties, and try to close this story," said Dacic.

The minister pointed out that this represents "a big change" - while he is "aware that this may not sound enough for somebody" - but that he, as someone who has been participating in it for years, "believes that this is a big change."

Speaking about the dialogue between Belgrade and Pristina, Dacic is quoted as saying that Serbia "has a lack of ideas, as there are people who always, when the country needs to be defended, find a reason not to do it."

"Even now we have the situation that in the political scene and in society you have those who are inciting extreme ideas and unrealistic ones, that are based on the fact that the problem of Kosovo should not be solved, with the excuse that some better times will come. Which better times on the international scene can come to make Djakovica Serb?," he said.

Asked to comment on why the Church refuses to accept as one of the solution a possible partition of Kosovo, Dacic said he did not see a better solution than that, adding that he was perhaps "the only one in Serbia that gas put forward any solution."

"It's a soluktion where the Serb people are a majority, and that's not just north, but let's see where else it can be done, to connect with central Serbia, I really don't see a better solution, unless someone thinks by some miracle the ethnic structure in Kacanik, Glogovac will change," he said.

While time may be a relative category for the Church, Dacic continued, "for people in Kosovo and Metohija is a real category and a solution should be found."

"If the Albanians agree to autonomy in Serbia, I am absolutely for it," the minister said and asked representatives of the Church what their proposal was.

"Who is looking for and loving partition? If something else was possible, I certainly would not suggest such a thing", said Dacic.

the Albanians think that, according to the model of Croatia's Operation Storm, the Kosovo issue can be resolved, Dacic said, and added that "it may be easier to some Serbs to lose the north militarily and then say that we never recognized anything."

He then mentioned opposition politicians "Dilas, Jeremic, Lutovac, Sasa Janković, Ceda Jovanovic and others" as declaring President Aleksandar Vucic a traitor on the same day as telling other newspapers that he is a war criminal. "All this has a bad effect on the people, because in this thing we should all be united, all Albanians have only one interest, which is an independent Kosovo, and in their soul a Greater Albania," he said.

Dacic then said that the Serb people "should be sure that President Vucic, who is conducting the Belgrade-Pristina dialogue, and himself as the foreign minister, firmly stand behind national and state interests."

He recalled that he had visited countries and asked them to withdraw their recognition of Kosovo, and that six have done so to date, while he would continue with those activities.

"We never agreed with anything that would mean recognizing Kosovo, nor will we. Any chairs (for Pristina) in the UN are out of the question. There can only be a discussion if there is a will to compromise, which means that each side loses and gets something. In the long run, we have a problem of the danger of a military attack on north Kosovo, and what Serbia will do then," Dacic said.

The current opposition in Serbia toppled Slobodan Milosevic because he defended Kosovo and entered a war, saying it was unreasonable, Dacic said, adding that it is in the interest of the Serb people for "the position (the authorities) and the opposition" to unite in terms of Kosovo and Metohija.

"Politics is something else, this is the interest of the Serb people, we need to unite around that. This is currently our biggest state and national interest. What solution there will be - there's the dialogue, nothing has been agreed yet," concluded Dacic.