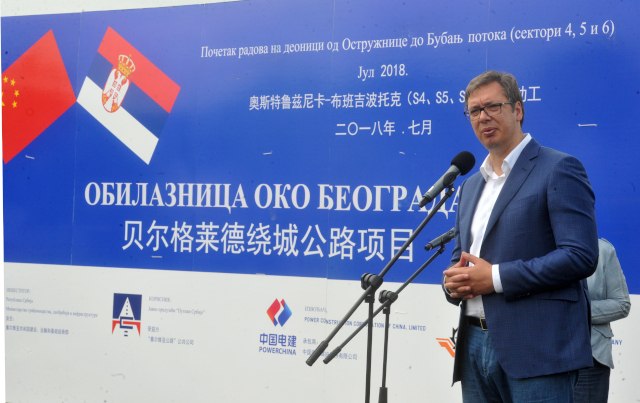 Vucic speaks at the construction site near Belgrade on Tuesday (Tanjug)

"The painful reforms that we had in 2014, 2015, and 2016, we will no longer have. Is it all easy? Well, it's not easy. These (apparently a reference to his political opponents) now think that everything is easy after they destroyed Serbia, then someone fixed it, so they would like to grab riches again and be able to seal, but not everything is easy," Vucic said on Tuesday.

He added that currently the biggest challenge for Serbia is the Kosovo issue, and that there would be "partially difficult jobs" in the coming period, that need to be done, but, he continued, "nothing as difficult as the way it was in 2014 and 2015."

The president was attending the start of works on a bypass around Belgrade when he also referred to the recently published report of the European Statistical Agency (Eurostat), which presents the state of affairs in the economies of the EU member states and the candidate countries.

"Things as you see are going much better and this is evidence of further stabilization and a secure Serbia's path," the president said, adding that the engagement of the IMF in the past period was significant for Serbia.

"I thank the IMF for this engagement, it is quite sufficient, and we do not need their money," Vucic said.

Also on Tuesday, the IMF announced that Serbia had succeeded in addressing macroeconomic imbalances and restoring confidence, while the resilience of the financial sector had improved.

This has been reflected in rising foreign and domestic investment and an economic recovery, the international monetary institution said in a report.

The 84-page report follow a decision by the IMF Executive Board to approve a new, non-financial program of cooperation for Serbia, supported by a 30-month Policy Coordination Instrument.