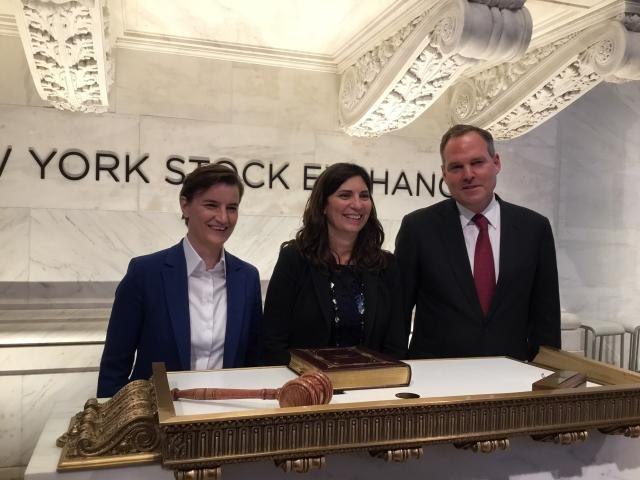 Cunningham, as the first woman to run the New York Stock Exchange since its inception 226 years ago, has presented her experiences and challenges in running this institution with a long tradition.

During the tour of the New York Stock Exchange, Brnabic and Cunningham discussed the business climate and business conditions.

The prime minister stressed that Serbia is open to business and cooperation with the world's leading companies, and added that our country was given the recognition of the leading international financial institutions for the reforms implemented.

Also, she added, Serbia is today the leader in attracting foreign direct investment, according to the Financial Times.

The prime minister signed the Book of Impressions and presented Cunningham with a book about Nikola Tesla.

They agreed that it is important to encourage women to engage in politics and business as much as possible and to fight for their careers and an equal position in society.

In the continuation of her visit to New York, Brnabic met with the representatives of the Serbian Entrepreneurs Association, founded by entrepreneurs of Serbian origin in 2016 in the Silicon Valley, in order to support the development of the Serbian start-up ecosystem around the world.