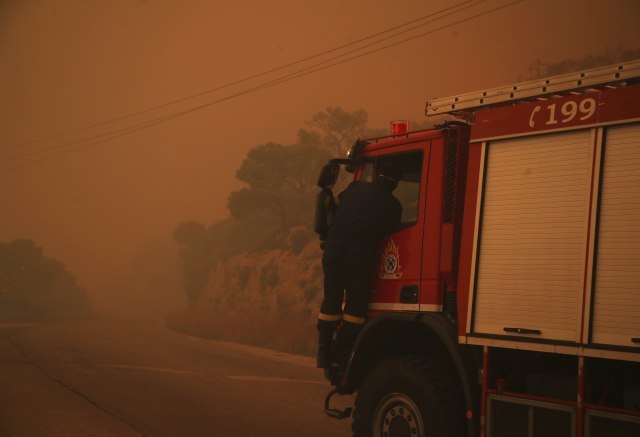 26 bodies have been found in the yard of a villa in the resort of Mati, near Athens. There are many children among the more than 100 injured people, international media are reporting.

Many victims have been found in the area between Rafina and Nea Makaria, especially in Mati, 29 kilometers east of Athens. They were trapped in their homes and cars that they used to try to escape the blaze.

According to media reports, about ten people, most likely Danish tourists, went missing after jumping into a boat and heading in an unknown direction, in an attempt to flee the fire. They are ow being searched from the sea and from the air.

Greek Prime Minister Alexis Tsipras has cut short his visit to Bosnia-Herzgovina due to the natural disaster at home. A state of emergency has been declared in Athens.

Three days of mourning have been declared in Greece in the wake of the tragedy,

The Serbian embassy in Athens on Tuesday had no information that any Serbian citizens were among the victims. Serbian officials, meanwhile, offered their condolences and help to Greece.

A total of three wildfires are affecting the area around the capital. Strong winds that change direction fan the flames, and have created a fire ring in western and northeastern parts around the city. The air temperature at the same time has risen to 40 degrees Celsius.