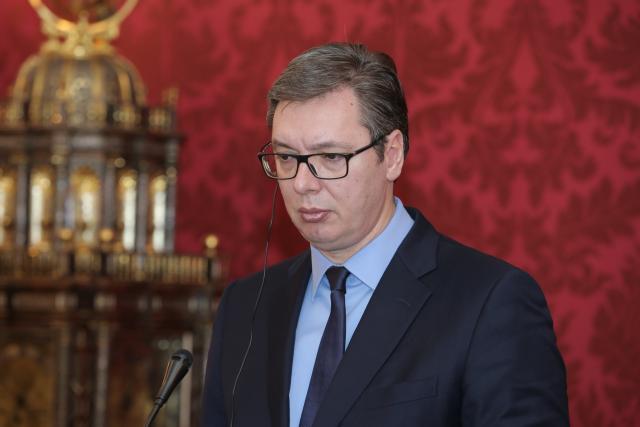 "Our policy is the EU, but also preservation and promotion of friendships with traditional friends and allies, such as Russia and China. This policy is determined by the institutions of Serbia and will not change by the wish of any politician in Serbia," the Serbian president stressed in a statement to journalists in Baku, Azerbaijan.

He said this in response to comments in the German press about a possible change in Serbia's policy, after the response of Defense Minister Aleksandar Vulin to a recent interview given by the had of the EU delegation to Serbia, Sem Fabrizi.

To those who underestimate the importance of the EU for Serbia, Vucic said:

Commenting on German language media reports about "suspicion that Serbia is abandoning the European path," Vucic said he did not know what that was about, "unless it was because of Vulin's statement."

Tanjug quoted Vucic as saying on Tuesday that at the time he took the oath of office as prime minister, "he said that what Serbia's policy is, and it is a policy of friendship and respect toward friends, that Serbia will not impose sanctions on Serbia (sic) and that Serbia is on a European path, and repeated that when he became president."

"That is Serbia's policy and it will not change because of the wishes of one or five persons," he said.

Commenting on Fabrizi's statement, Vucic said it was true that Kosovo is a stumbling block on the path toward the EU.

"I saw nothing contentious is what Fabrizi was saying," said Vucic.

In his interview for Blic published on Sunday, Sem Fabrizi said that Kosovo was "the key element in Serbia's accession to the European Union."

Reacting the same day, Aleksandar Vulin said that if the EU finds only the stance toward the Kosovo problem to be of key importance, and if it is setting conditions that it knows will not be fulfilled, i.e., looking for an excuse not to accept Serbia as a member - "then we should think about changing our foreign policy priorities."