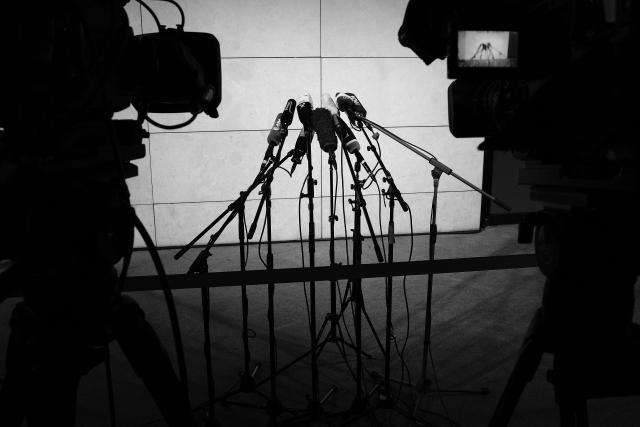 Journalists’ Association of Serbia (JAS/UNS) discussed this issue with Matic, as well as UNS investigations into the killings and abductions of journalists in KiM, but also about the accomplishments of the Serbian Commission.

While a guest on the show “Speak Serbian Freely”, you stated that you have reached agreement with OSCE that in the next few months, you are going to investigate the fate of the missing and killed journalists in KiM, and that you will "try to gather documents that no one had asked for, but that should be available in certain cases“. For years now, UNS requests from international and Serbian institutions the information on the colleagues and publishes it. Are you familiar with this fact, and why you hadn’t mentioned it in the interview, and are you going to use the data that UNS had provided?

VERAN MATIC: A year ago or so, on the OSCE Conference, I had presented the work of the Commission for investigating the killings of journalists, and I proposed for similar body to be established for resolving murders and abductions of the journalists in Kosovo. In the radio show, I had underlined the fact that on this conference, only UNS representative had for the first time given full data on the number of killed and journalists that had gone missing.

Of course, I had followed the engagement of UNS since the protests in front of UNMIK offices in Prishtina, back in 2009, to be followed by placing a plaque on the spot where Ranko Perenic and Djuro Slavuj were abducted, as well as vandalistic demolition for at least six times of the same plaque, while the perpetrators were never found. This kind of determination is very important for keeping this issue up to date.

For the last 12 months, UNS and Jelena Petkovic had done a tremendous job in investigating those cases. B92.net had posted all their texts, meaning that I am perfectly aware of all that UNS has been doing. Moreover, there are other newsdesks that also dealt with this issue, such as Insider, RTS, Gazette Express, Media Center Caglavica and Budimir Nicic...

I was perhaps imprecise in the show, as I had spoken in my capacity as OSCE consultant and the fact that numerous international bodies that took part in Kosovo do not have precise evidence, which was demonstrated by the Head of EULEX on the above mentioned conference. Due to this, it is necessary to unite all possible relevant sources, committing them to take part in gathering available data, results of their activities, in order to make the best possible form of permanent body that will then systematically deal with these cases, in order to resolve the fate of those who were gone missing, including the perpetrators being identified and punished accordingly, as well as those who ordered murders.

EULEX and UNMIK had given UNS certain information only when we showed them that we got hold of certain data that they own, reaching them though our investigation. Given this fact, do you really believe that international institutions on Kosovo and outside of it will now support the efforts to investigate killings of journalists and punsih those responsible for them?

VERAN MATIC: OSCE Mission to Kosovo is highly devoted to this issue. I believe that for the next couple of months we will be able to reach other institutions regarding this issue. UN, UNESCO, OSCE Office for freedom of the media with headquarters in Vienna, Council of Europe (soon, Dunja Mijatovic will take over the position of Commissioner for Human Rights) had very strong resolutions against impunity when it comes to the killings of journalists, as well as powerful programs, and I believe that it is possible that heads of those institutions should get involved in fulfilling conditions for uniting efforts in investigation processes, together with other actors in the field. .

Of course, it is important that journalistic community, not only UNS, strongly deals with this issue, so that we could come up with facts through investigation, including testimonies... as this issue is still a kind of taboo. International organizations that specialize in killings and cases of abductions of journalists, such as Committee to Protect Journalists, Reporters Without Borders, International Federation of Journalists, ... all those institutions should get involved in resolving those 14 cases, and those had to become an open subject of all relevant negotiations on the future of Kosovo.

How do you regard the fact that Serbian state bodies since 2000 hadn’t showed interest for investigating those murders and that only UNS had gathered data on them?

VERAN MATIC: We are yet to face with discussing this issue with the Serbian institutions, with the people that were on certain positions in the Ministy of Internal Affairs back then, in State Security Agency, in Prosecution Offices... From Jelena Petkovic’s articles, we can find out that they were present on the murder scenes immediately after the murders took place, so I believe that there are written traces from the investigation from the spot. Certainly, till June 1999, up to which time several abductions and murders took place, I believe that there are documents and possible relevant testimonies. Of course, in the period that followed, several years later, although there weren’t Serbian institutions on the spot, there are people that gathered data and that have access to certain facts on the killings and abductions that took place after Kumanovo Agreement.

Our task is to find them and to document their testimonies.

You are chairing state Serbian Commission for investigating the killings of journalists for more than five years now. On the occasion of launching the commission, you’ve faced with the boycott of Independent Journalists’ Association of Serbia (IJAS/NUNS), and colleagues from NUNS and media close to this association rarely recognize the accomplishments of the Commission for bringing charges against the killers of Slavko Curuvija. What do you think why some colleagues from NUNS still speak of Curuvija’s murder as if the Prosecution hadn’t resolved it?

VERAN MATIC: I will not get into the motives of NUNS. I believe that all journalists and associations need to make all the efforts in resolving the murder and violence against journalists.
It is clear to all that, if there were no Commission, there would be no charges brought, followed by judicial process for the murder of Slavko Curuvija. Globally, the work of the Commission and its results so far are recognized as one of rare successful models for facing the impunity of killing of journalists.

The problems with the safety of journalists are getting much more complicated, the killings are difficult to resolve after so many years gone by, and it calls for serious joint efforts and tight cooperation with the relevant institutions. If we have as a goal to make everything in our powers in order to make significant progress.

In Serbia, till the Commission was established, it seems as if there was no political willingness to resolve murders of journalists. Will the consultations you are going to head on Kosovo serve only as feigning interest for resolving the murders, or political will in Prishtina really exist for launching investigations and resolving the cases finally?

VERAN MATIC: I am convinced in the genuine determination of the OSCE office in Prishtina. We are ahead of big deal of conducting interviews with relevant institutions in Kosovo regarding making conditions to deal with the investigations as seriously as possible.

It is of utmost importance that media communities, journalistic associations on Kosovo, and „Serbian“ and „Albanian“ sides should put joint efforts and make activities that will permanently provide journalistic investigation on those cases, constant reminders to the domestic and international public, thus creating atmosphere of becoming normal to lead investigation with the goal of reaching results, bring charges and indictments.

I believe that the role of UNS is very important, the resolve to keep going with this project, as well as with Resolution on the 14 journalists killed and gone missing on Kosovo, that will be submitted to the Eurpean Federation of Journalists (EFJ)...

Of course, we have to stimulate political willingness of the authorities in Serbia in resolving those killings and abductions, treating those cases as the cases which are under auspices of the Commission for investigating the killings of journalists.

Do you expect that those cases of killings of journalists should become subject of Special Court for war crimes in Kosovo?

VERAN MATIC: I do believe that this court had to deal with those cases. We need to contact prosecutors of the Special Court, informing them fully on every data we gather so far, certainly counting on documents that UNS had provided so far and will provide in future.