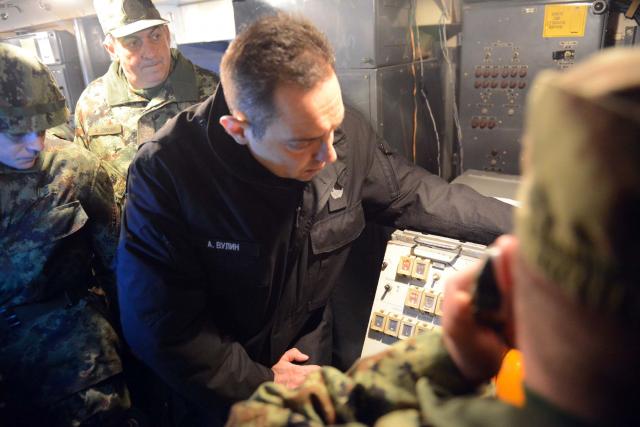 Vulin is seen spending New Year's with members of the Serbian Army (mod.gov.rs)

Vulin said that in addition to the six MiG-29 warplanes donated by Russia, along with 30 modernized T-72 tanks, Serbia will receive 30 armored infantry vehicles.

"We hope to introduce into service at least seven different weapons and tools from the domestic production. We are preparing 95 different projects to enter into the armaments of our military, from our smarts and our defense industry. Therefore, the army will be modernized in accordance with the world's highest standards," he said.

According to him, the Russian Federation is our great foreign policy friend and has already provided donations, while it is expected that Serbia will next year "concentrate on acquiring new Mi-17 helicopters from Russia."

Asked to comment on speculation about an agreement with Belarus on the delivery of more MiG-29s, and of S-300 air defense missile systems, Vulin said that "such serious systems cannot be discussed in the media."

"It would be truly frivolous if any of the state representatives were to speak about it. When we decide, if we decide, trust me, you will learn about it," the minister told the website.

Asked whether Serbia has become "the strongest,or if it at least counts among one of the stronger powers in the region" Vulin replied, "We can say, at the very least, that we are equal to everyone in the region."

"We have strengthened our defense industry considerably. The Serbian government has invested some 50 million euros in the development of the defense industry, which is a measure that has not been taken for decades. We had a long period of planned destruction of the defense industry of Serbia... From 2012, just as Aleksandar Vucic became minister of defense, that industry started its return, the state began to invest and our military industry began to appear in the world markets."

According to Vulin, Serbia now sells weapons and ammunition "in all world markets, in the United States, Russia, Arab and African countries - the defense industry of Serbia is highly valued in the whole world."