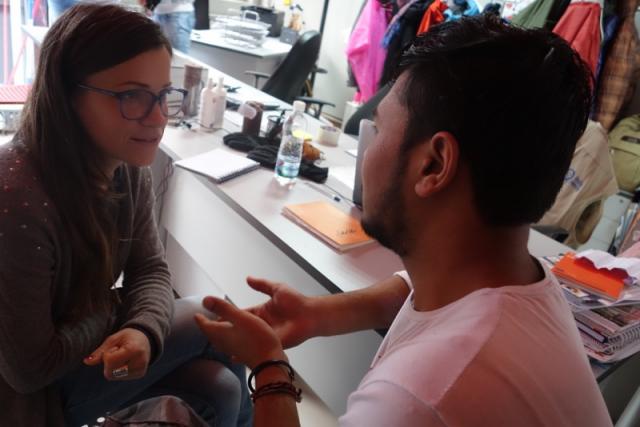 From their confessions, today personal security is the number one issue, if the closed borders are excluded. "They attacked me four times, each time it was something else, I was taken off the phone once, and the other time they saw me buying something, so they forced me to squeeze everything out of my pockets, the last time they attacked me because I defended the boy who just came and they were placed in my camp room. Every time I retreated from a knife - and this is precisely why I fled my country: violence," says an Afghan migrant who comes to the Info Park daily. One in a series of testimonies of a difficult and especially unsafe situation that we hear every day.

This was in many ways the hardest year since the beginning of the crisis for migrants in Serbia. At the beginning of the year in the center of Belgrade, in the improvised settlement whose photos hit the global media, up to 2,400 migrants lived, mostly from Afghanistan and Pakistan. At one point, it was one third of the total number of this population in Serbia - a third that stayed outside of the system. The country has offered a solution: a bed and a warm meal in 18 centers whose capacity is now sufficient so the number of migrants sleeping rough has been dramatically reduced.

However, in most cases, migrants experience their stay in the camp as a stopover for survival. They go reluctantly there, especially in centers away from the western and northern borders. Suffering from smugglers and violent gangs is also devastating. There is still no effective solution; migrants can not resist themselves because they are in a closed circle where their further travel to Europe on the very same smugglers. The number and severity of incidents is rising; luckily, so far they are not transferred to the local population, but with the approach that violence is an internal issue of migrant community, it is hard to expect that this will not change in 2018, for worse. In addition to introducing the most of migrants into the legal system, to camps, it is precisely the great rise in violence in their communities is another thing that marked the migrant 2017 year.

The Iranians are coming

In the past months, the first place in the number of arrivals by country of origin belongs to Pakistan. Nevertheless, we are also witnessing a new phenomena such as the huge increase in the number of arrivals of citizens from Iran who, after the abolition of visas in late August, come to Serbia on a daily basis, with regular flights as tourists and with the intention to continue their illegal routes to Europe. Some of them are involved in the asylum system, some are staying as "tourists", and everyone is there with the intention of getting to EU as soon as possible.

This creates additional pressure on the work of organizations on the ground and diminishes productivity in providing first support to the endangered migrant population, currently based on the symbiosis of work between state institutions such as the Commissariat for Refugees and Migration of the Republic of Serbia (KIRS), and organizations such as Praxis, Info Park or Miksaliste, among other. Thanks to this good cooperation, most migrants come to camps sooner or later.

In three days, the winter begins. At present, in Serbia, despite the enormous efforts of state and civil society actors, hundreds of people are sleeping outside in deserted buildings and ruins that resemble landfills or wild places rather than the conditions of a decent man. The reason for this is mistrust. Compared to the situation last winter at critical points (Belgrade, Sid), we could conclude that the improvement is huge because their number is far smaller, but we want to repeat: and one man who resides in inhuman conditions with impaired dignity in Serbia is too much.

On this day, the International Day of Migrants, Info Park appeals to all who work in the network of help, and especially to organizations with the mandate to take care of migrants, to improve the response to the situation in which they are. As long as the last one does not receive the help and security that he deserves as a human being.