The Serbian team from Politehnika - a school for new technologies from Belgrade - yesterday achieved great success.

The Serbian team from Politehnika - a school for new technologies from Belgrade - yesterday achieved great success. 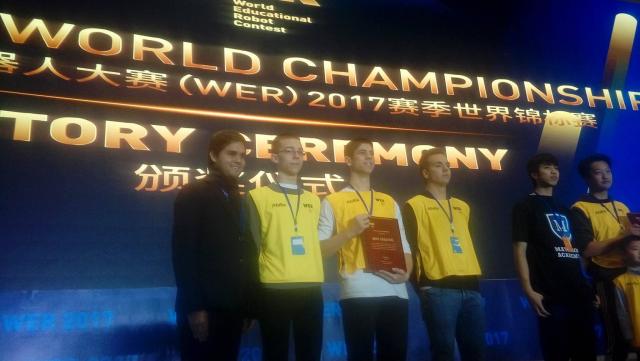 High high school students Mihajlo Mihajlovic, Masan Vucinic and Nikola Starcevic, with the support of mentor Jovan Miletic, competed in China on November 18 and 19 against 8,000 other best young robotics students from 16 countries.

"It's not one of the main awards, but this one is very dear to us. Along with the desire to popularize robotics among young people throughout Serbia, we also try to adequately represent the country from which we come. Bravo Nikola, Mihajlo and Masane," professor Jovan Miletic wrote on Facebook.

This is the first time that Serbia has had representatives in this prestigious competition, and the opportunity to participate came through winning the second place in the WER open cup of Croatia and the region, organized in September by IRIM - Croatian Makers.

In addition to the team from Serbia, three teams from Croatia and two from Bosnia-Herzegovina took part this year, whose members also won some of the prizes.

"This is proof that in top competitions, we can show individual skills and knowledge using regional cooperation, which has been very successfully implemented along with IRIM from Zagreb," said Veran Matic, president of the Board of Fund B92 - which is implementing the Battle for Knowledge campaign, aimed at introducing robotics and programming into primary and secondary schools in Serbia.

The initiator of the campaign in Croatia, the Institute for Development and Youth Innovation, has donated advanced Abilix equipment to Battle for Knowledge, within which the Politehnika school received this equipment that is used for the prestigious WER competition. Fund B92 and Battle for Knowledge financially supported the participation and travel of teams from Serbia to the qualification competition in Zagreb in September, and then the participation of the best Serbian team in the final in Shanghai.

Battle for Knowledge was launched in January this year, and so far, 401 primary school in Serbia has been included in the program. This means that these schools have received five mBot robots each, intended for teaching programming in primary schools, and that teachers from these schools have been trained to use these robots as teaching tools. The funds for the purchase of educational robots were provided by several dozen socially responsible companies, institutions and organizations, including the Ministry of State Administration and Local Self-Government, UNDP Serbia, Ministry of Trade, Tourism and Telecommunications, the Serbian Chamber of Commerce, IRIM, Vip Mobile, BIC. The full list of all donors who supported the campaign is available here.

A competition for all primary schools that want to join the program is open at bitkazaznanje.rs. Fund B92 invites all socially responsible companies, institutions, organizations, and individuals to support this humanitarian educational program so that all elementary schools in Serbia are provided with modern teaching tools.

"We need donor support not only to buy modern equipment for schools, but also to prepare and organize competitions, educate teachers, and popularize programming and robotics among young people. In addition to the KODigranje competition where primary school students from across Serbia participate, next year we plan to organize qualifications for the next WER world cup, as well as many other new things," said Battle for Knowledge Coordinator Nebojsa Glisic, speaking from Shanghai.