Located only 400 kilometers south of Greek summer resorts popular with Serbians is the capital of Greece and the cradle of western civilization, Athens.

Located only 400 kilometers south of Greek summer resorts popular with Serbians is the capital of Greece and the cradle of western civilization, Athens. 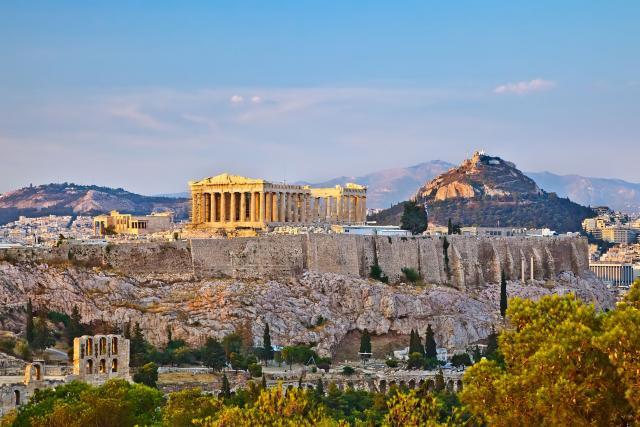 Read more about why the capital of the ancient, as well as of modern Greece is a perfect destination for a holiday trip - but also the places you can visit, and how you can enrich your life experience in only a few days.

According to Sofia Lazaridou, a representative of the Greek National Tourism Organization (GNTO) in Serbia, besides being an accessible destination, Athens has more sunny days in winter than any other European capital. Precisely this makes it a perfect holiday destination for anyone wishing to escape the winter days. Gardens in taverns and cafes are still open for enjoying the colors, scents and tastes of the gastronomical heaven offered by this country. With an average temperature of 13 degrees, it is unlikely you will be cold as you stroll through the center of of the city, or by the sea. Those brave enough could even take a swim.

"The festive atmosphere before Christmas and New Year in the streets of Athens begins much earlier and is celebrated in every part of the city - with festivals, concerts, events in the streets and squares, festive decorations on trees, windows and houses. Everything is shining, and the most important decoration are the smiles and the open heart of the Athenians," Lazaridou tells B92.

Let's take a walk together around Athens and see what you must not miss. The capital with five million people guards its ancient spirit and rich history everywhere, at the same time providing relaxation that can hardly be experienced in some other busy metropolis.

It is not said for nothing that there are two Athens - one modern and the one that is underneath it. Therefore, a trip to Athens is best started by visiting the Acropolis Museum, a magnificent building whose construction cost 130 million euros. It is the size of the Parthenon, and is located at the very foot of the Acropolis in Makrianni. The real spirit of ancient Greece is felt here while walking along its transparent floors, below which lies an archaeological site.

The edifice housing several thousand exhibits ranging from the 7th century BC until the Hellenistic period also has five original caryatids, and is saving room for the sixth, which is currently in Great Britain and is the subject of dispute between the two countries. Due to sensitivity to climatic changes, the original caryatids are located in the museum, while faithful replicas replace them on the Acropolis Hill. Walking around the museum, you will quickly understand why Greece will never be a poor country, and it is very likely that you will wish to visit the Acropolis Museum every time you return to Athens, discovering something new each time.

Each part of the museum offers a view of the Acropolis, which you will immediately want to climb after exiting. At the very top of the hill is the Parthenon, a temple dedicated to the goddess Athena. Unfortunately, the Acropolis has been hit with two major catastrophes - the first in 1687 when the Venetian army, under the leadership of Francesco Morosini, shelled the Parthenon and split it into two parts. Even the Turks wanted to stop the ruthless destruction, so they raised the white flag as a sign of surrender. Since then, Francesco Morosini remains forever remembered as the man who stole the soul of Athens and severely damaged the Parthenon.

The second catastrophe occurred in 1806 when Thomas Bruce, the earl of Elgin, took some of the famous sculptures to Britain thanks to the permission he received from the Turks. Some of the artifacts are still in the British Museum in London. Once we learn how Parthenon has resisted history, and the jealousy of its magnificence, we will appreciate every moment spent in it because, in the end, it also makes us a part of its history.

If you regret not having the time to also visit some of the magical Greek islands, there is no reason to worry, because you can do so as soon as you complete the visit to the Parthenon. Namely, at the foot of Mount Acropolis lies the small neighborhood of Anafiotika. As soon as you step onto its streets, you will wonder when you had been beamed onto a Greek island with white houses, blue windows, and narrow streets adorned by bougainvillea. When, at the beginning of the twentieth century, workers from the Anafi island came to Athens, out of nostalgia for their homes, they built a small settlement that resembles the island remarkably. Today, there are 45 houses inhabited by the descendants of refugees from Anafi, and the streets are still unnamed, with addresses Anafiotika 1 and Anafiotika 2. A true Cyclades spirit in the heart of Athens, which you must not miss!

Descending down towards Plaka, the ancient spirit in you begins to be replaced with the traditional one, closer to modern Greek culture. This district has numerous taverns offering the original Greek cuisine, and you can find everything on the menu - from saganaki, dried tomatoes, moussaka, traditional Greek pies, to the finest sea fish, kipuria, and some of the best wines from the Peloponnese. In addition, Plaka is perfect for buying New Year's gifts, and not far from it, along the boulevard of the first Greek (though, imported) queen Amalia, you arrive to Syntagma, from where lies Ermou Street - the shopping Mecca of Athens.

Athens is a city that never sleeps, and each of its corners and its air instills you with some completely new energy that you did not even know you had. Evenings are reserved for what you want - if you are urban and like modern places, head to Kolonaki, a fashionable district with some of the best bars and clubs in Athens. If you are a fan of traditional Greece, head towards Plaka to one of the taverns where rebetiko is performed - the original Greek music that Onasis brought back to fashion. It is interesting that this type of music did not appeal to the Athens rich - and it is no surprise when we consider that it describes the hard life of laborers. Nevertheless, Onasis, who was originally from Asia Minor and who came to Piraeus as a refugee, enjoyed it.. Every time he came to Athens, he would go to the district of Kesariani, where Giorgos Zampetas sang in a tavern. He would perform rebetiko for Onazis, and other rich men quickly followed suite, thus restoring the musical style to the place it deserved.

The perfect way to round off your first day in Athens is to head out to the Hellenic Parliament and attend the changing of the Evzones guards - the historical elite units of the Greek army. Dressed in the traditional Fustanella, the Evzones keep guard 24 hours a day in front of the Tomb of the Unknown Soldier. They change every hour, walking in clogs with 400 nails, each representing one year under the Turks. Their walk represents the step of a persevering nation, and is a kind of performance that will best show you the pride and spirit of the Greek people.

Set aside the second day for a more relaxed side of Athens - its coast. On the way to the coast, do not miss the Stavros Niarchos Foundation Cultural Center, built recently in honor of one of the biggest Greek shipowners whose foundation has invested money in the construction of this masterpiece, that is a favorite place of all those who want to enjoy the sea air, panoramic views of all parts of Athens, but also the most important cultural attractions. The Cultural Center, whose construction cost USD 867 million, houses the National Library of Greece and the National Opera, and is managed by the Greek government.

The great location of the Stavros Niarchos Cultural Center, right above the port in Paleo Faliro, offers two choices for further enjoyment of Athens - to the left, toward the Glyfada coast, and to the right, toward Piraeus. The Glyfada coast abounds in beautiful sandy beaches, and in the wonderful restaurants on the coast or at Lake Vouliagmeni, which will take your breath away with its natural beauty, you will forget about the winter days. If you go to the right, to Piraeus, you will first reach a small port with some of the most beautiful restaurants and bars located one next to the other, just above the sea.

During your stay in Athens, make sure to visit the Panathenaic Stadium, also known as Kallimarmaro, near the Hilton Hotel in downtown Athens. The stadium was opened in 566 BC and renovated in 329 BS. It is made of marble, making it unique in the world. In ancient Greece, it was the center of athletic competitions in honor of the goddess Athens, while centuries later it was the location of the first modern Olympic Games in 1896. Today, various manifestations are held at the site, which has the capacity of 45,000 people.

Set aside one of the days you spend in Athens for a small trip outside the city. Namely, only 69 kilometers southeast of Athens lies Sounion - the southernmost point of the Attic Peninsula. The Sounion is home to the famous Poseidon Temple, dedicated to the god of the sea. Interestingly, the name of the English poet Byron is carved into one of the pillars, where he immortalized it, enchanted by the myths about the sea god. The place is extremely popular because of spectacular sunsets, that "fall" among the pillars, providing a unique scene, especially for lovers of photography.

Your visit to Athens can be completed in the best possible way - by going to Lykavittos Hill, located above the Kolonaki district in the city center. The highest point in Athens provides a view of the whole city, but also of the Acropolis that lies beneath it. Along with enjoying the Orizontes restaurant specials, you will round up your trip to Athens in the best possible way by taking a look at everything you had visited in previous days.

Is there a better way to sum up your impressions?