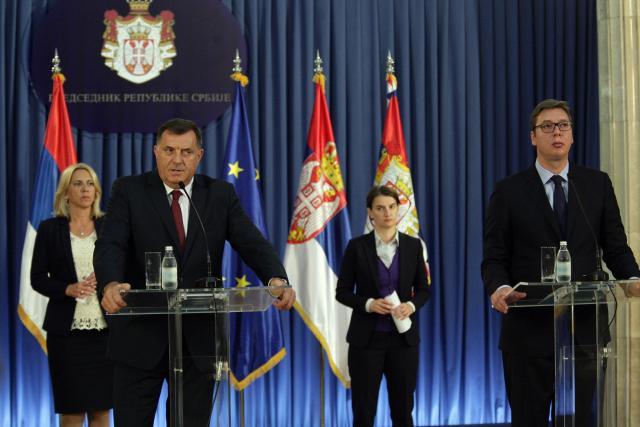 Vucic announced that Serbia will also help those municipalities in Bosnia's other entity - the Muslim-Croat Federation of Bosnia-Herzegovina (FBiH) - inhabited predominantly by Serbs.

"The Republic of Serbia, both in line with the Dayton Peace Accord and its own determination, and in line with the law, is making efforts to support its people west of the Drina (River)," he said.

Vucic also announced that a team has been formed to draft a declaration that will concern the right of Serbs to use their language and the Cyrillic alphabet, study and nurture their culture, history, and Serb freedom-loving traditions, preserve national geography, their right to preserve and protect the Serb cultural and historical heritage, and have media in the Serbian language.

These are the areas to be covered by the declaration, "in line with all international public-legal acts," he said.

Vucic also said that while Serbia respects Bosnia-Herzegovina's territorial integrity, "and has no problem with it" - the country at the same time "does not wish anyone to object to the fact that we are proud to be one people."

According to Dodik, the declaration could be on the agendas of the parliaments of Serbia and the RS as early as November.

He remarked that Serbs in Bosnia-Herzegovina and Croatia find it an important point and dislike the stereotype that they are "Bosnian Serbs" and "Serbs from Croatia."

"We are all Serbs, and we want to refer to that fact through the declaration - because somebody has deliberately created that mess and started driving us apart," Dodik said.