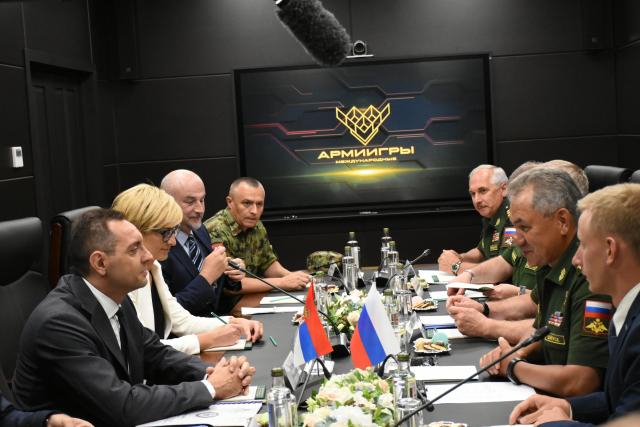 Vulin, Shoigu, and their delegations meet at Alabino (Serbian MoD)

"Ministers such as Dacic and Vulin often go a little farther in their declarations of love to Russia, which worries officials in Brussels. The same is true of Vulin's recent statements," this source said.

"No NATO, and no sanctions"

Serbia's defense minister met with his Russian counterpart at the Alabino Range near Moscow over the weekend. Vulin traveled there at Shoigu's invitation to attend the closing ceremony of this year's International Army Games, where Serbian soldiers competed.

"I want to thank the Russian Federation for the way the delegation of the Ministry of Defense and the Army of Serbia has been welcomed, and the treatment of our troops during the entire course of the Tank Biathlon," Vulin said, according to his remarks published by the Serbian Ministry of Defense, and added:

"Minister Shoigu is a man who truly loves Serbia and who is our friend. Our two countries understand, respect and help one another, and I took advantage of the opportunity to once again express my gratitude for the principled position of the Russian Federation when it comes to its stance towards Kosovo and Metohija, and to ask him to further continue with this policy."

Vulin said that he conveyed "personal greetings of the supreme commander (of the Army) and the President of the Republic of Serbia, Aleksandar Vucic - as well as his invitation to President Vladimir Putin to join us next year for the celebration of the centenary of the Salonica Front breakthrough, a time when we were winning together and fighting together."

The minster said that he also, on behalf of Vucic, invited Shoigu to attend the anniversary of the liberation of Belgrade on October 20 this year, "and reaffirm our friendship together once again, how important and courageous we were in the past and how important and brave we will be in the future."

According to an MoD statement, the meeting confirmed the importance of providing the Serbian Army with new equipment, "especially fighter jets, tanks and combat vehicles," in order to realize and improve the training process and to strengthen its operational capabilities in facing the many challenges and threats of "an increasingly unstable world."

Vulin also stressed that the MiG-29 aircraft that will enter service in the Serbian Air Force "are arriving from the Russian Federation according to plan." All administrative procedures have been completed and the Russian and Serbian sides have fulfilled what has been agreed, while technical procedures remain to be done.

Vulin said he hoped that the warplanes would arrive by the end of the year, and after that the equipment that will go to the ground troops.

"Once again I confirmed our principled position of continuing to be military neutral, as we are now, and that in making every decision of ours we will, of course, take into account the interests of Serbia in the first place, and it is in the interest of Serbia are to have the best possible relations with Russia," the minister said, and added:

"As long as Aleksandar Vucic is the supreme commander and president of the Republic of Serbia and as long as I am the defense minister, Serbia will not be a member of NATO and will not be a member of any military alliance, just as it will never impose sanctions on the Russian Federation. Serbia has won its right to decide on its friends, to decide to make its own political and military path, and so it will continue. I told my hosts that we are military neutral, that it was out of the question to enter any kind of military alliance, either NATO or CSTO, and that we will definitely continue to act in a friendly manner and, of course, in accordance with our inters. Our path, when it comes to the EU, is perfectly clear and I said that, but when the military determination is in question, we remain neutral and so it will be. "

"I am convinced that we will continue to proceed with the development of mutually beneficial bilateral military cooperation between Serbia and Russia, who are carefully building and guarding their special relationship, as defined in the Declaration on Strategic Partnership, to which a special stamp is given by presidents Aleksandar Vucic and Vladimir Putin," said Vulin, and thanked the Russian Federation for "understanding and supporting Serbia in build relations with countries both in the East and in the West, in its best interest."