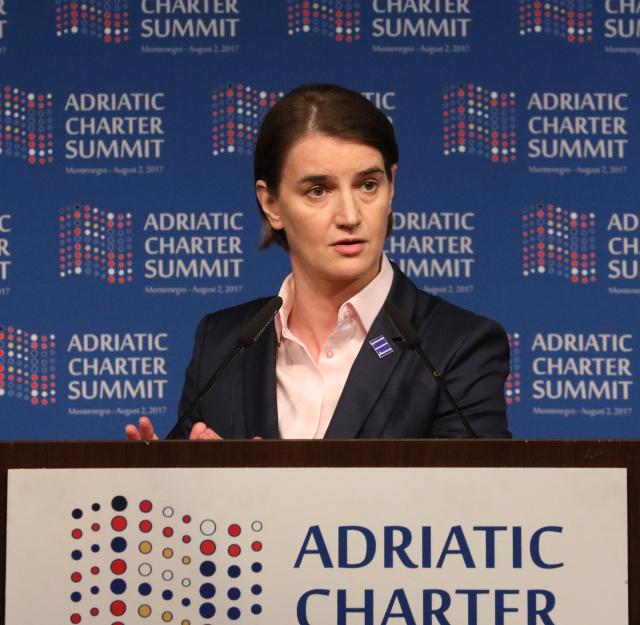 She recalled that since 2003, the Serbian armed forces have been participating in peacekeeping operations around the world, and that at this moment 332 members of the Serbian Armed Forces are in peacekeeping missions, providing assistance to the most vulnerable.

Serbian troops, as she said, are engaged in Congo, Liberia, Cyprus, Lebanon, the Middle East, Somalia, the Central African Republic and Mali, and according to the number of soldiers involved, Serbia ranks seventh in Europe and is 45th in the world.

According to Brnabic, by participating in United Nations and European Union peacekeeping operations, Serbia confirms its commitment to cooperation with EU countries and EU institutions.

The prime minister reiterated that Serbia is a military neutral country, but a responsible, predictable and reliable partner of the Alliance, and that it fully respects its neighbors' commitment to their membership in NATO.

Speaking about the security of the region, Brnabic recalled the migrant crisis in which Serbia is giving an active and constructive contribution, which is why it is often praised.

Our country has shown that it is ready to take over its share of the burden and share its responsibility in dealing with the migrant crisis, she said, adding that the joint forces of the Serbian Armed Forces and the Ministry of the Interior engaged in securing the state border give their special contribution.

Our commitment remains firmer cooperation with the countries of the region, and not isolation, Brnabic pointed out.

When it comes to cooperation with neighbors, the prime minister pointed out that the preservation of regional peace and stability is very important, because without it there is no economic recovery and stability, and therefore no achievement of European standards and values.

The continuation of economic reforms, increased competitiveness and joint infrastructure projects are our future, Brnabic said, adding that Serbia will pay the greatest attention to it in its foreign policy.