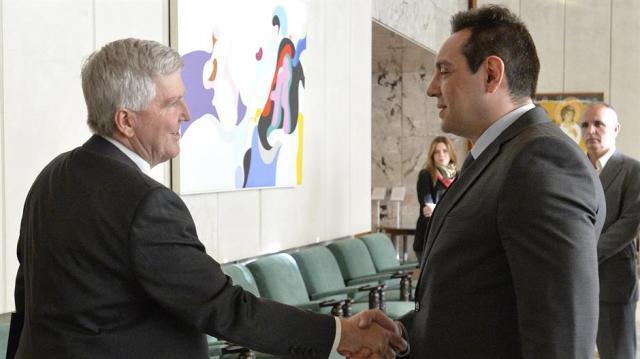 "According to the daily, the head of the Serbian state has, through US Ambassador Kyle Scott, received a signal that Washington opposes the intention of having Vulin take over the military portfolio, although the switch has practically been agreed, where Zoran Djordjevic will take Vulin's place in the ministry of labor," Tanjug is reporting on Tuesday, citing Vecernje Novosti, and adding:

"Vulin is a thorn in the United States side because of the hard-line rhetoric that he is prone to, especially in the context of relations with Albanians and Croats, and they consider him very dangerous to entrust to the defense system to. From the standpoint of the US, he is also guilty of good ties with Russia, which he has never tried to hide. The president of Serbia and SNS leader Aleksandar Vucic is exposed to the tremendous pressure from the United States in order for Aleksandar Vulin not to come to the helm of the Ministry of Defense.".

The daily adds that regardless of these undiplomatic recommendations, the Serbian president is determined to entrust Vulin with a new duty, "not wanting to give in to the demands coming from across the Atlantic."

Another daily, Blic, deals with the same topic, and reports that the choice of Vulin "for the first man of the army" would be "a real surprise, precisely because of his rather negative attitudes towards NATO."

"Vulin did not hesitate to characterize the Alliance, with which he would have to cooperate and which even helps the Serbian Army at the expert level, as being - evil," Tanjug quotes Blic.

Previously, Zoran Djordjevic told the daily Alo that PM-designate Ana Brnabic entrusted him with the department of labor, employment, veteran and social issues. Tanjug later reported that the defense portfolio would be taken over by Vulin, currently the labor minister, who in the past also served as minister without portfolio in charge of Kosovo and Metohija.

Aleksandar Vucic on Tuesday denied that he was under pressure because of the decision to appoint Aleksandar Vulin as Serbia's new defense minister.

Vucic said he "had no objections" that he might present to PM-designate Ana Brnabic, and that only minor changes will be made to the government's composition.

"The basis of the government is the same. I have been informed about the changes, as the leader of the largest party. I've had no objections that I would tell Ana about. I believe this government will continue to do a good job," he said.

Vucic also said that "nobody exerted pressure" regarding Vulin's appointment, as reported by Vecernje Novosti.

"Nobody called, it goes without saying that pressure cannot be exerted, but nobody tried, either. I don't want to play the hero, really, nobody asked me about that," Vucic said.