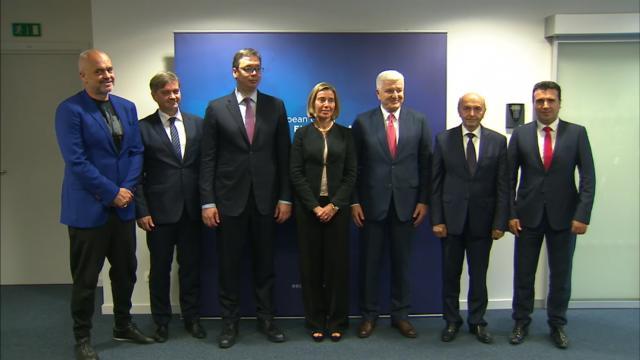 "They reiterated their determination and strong shared interest in strengthening cooperation and bringing about tangible results for the lives of the citizens of the region," the statement said, and continued:

"They emphasized their commitment to good neighborly relations and deepening regional understanding, through mutual respect and cooperation."

Mogherini "encouraged the six Prime Ministers to accelerate the necessary work in order to meet their citizens' expectations and move closer to their European Union future."

Vucic, who is also Serbia's president-elect, said the meeting in Brussels showed that "everyone understood the need to maintain stability and peace in the region" and that he once again spoke about his idea to form a regional customs union.

According to RTS, he said this was a market of 20 million people - "but of course not a substitute for EU membership" - and added that meetings in this and similar formats will continue in Brussels and elsewhere.

Responding to questions, Vucic said he spoke with Zaev, "who approached him."

"In a fair conversation, some statements made during the campaign in Macedonia have been clarified in a way, and we agreed to strengthen relations between the two countries," he said.

"Zaev was fair tonight. I do not want to talk about private relationships. We want to have good relations with Macedonia and we will have them," Vucic said, adding that he "did not hear" that a staffer of the Serbian embassy in Skopje who was the Macedonian Assembly during an incident on April 27 "participated in organizing or in committing a crime."

Asked about the European perspective of the region, he said that "Serbia is a bigger skeptic than the Montenegrin prime minister," who said on Wednesday night that sees Montenegro in the EU in five years' time.

Vucic said that the region needs to be on its European path and primarily strengthen the rule of law and the economy, but also cooperate with each other in the Western Balkans.

"I do not think that the region needs to wait, instead it must move forward politically and economically and avoid all the problems, disagreements and potential conflicts. If we do that, then whether you are in the EU in 2020, 2022, or 2024 is no longer absolutely the most important question," concluded Vucic.