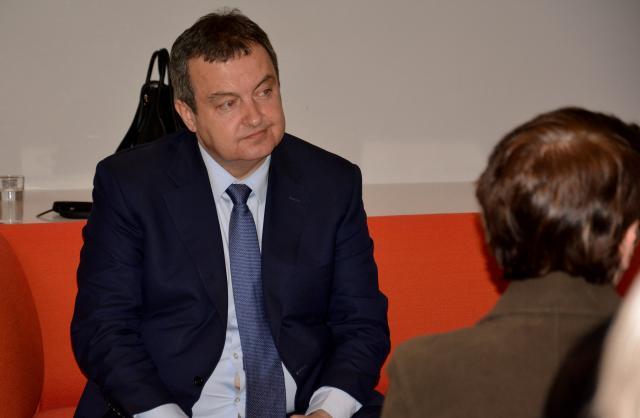 "Serbs are the biggest and best friends to Macedonians, while the way Zaev has acted is not the way friends of Serbia behave," Dacic said.

"I do not know what Aleksandar Vucic and the government of Serbia have done to deserve such a brutal and scandalous attack by Zoran Zaev, the pretender to the post of the Macedonian prime minister. Does he not have enough problems in Skopje, so he seeks them with Belgrade as well?," Dacic asked.

He recalled that Vucic has been calling for a peaceful solution to the problem in Macedonia "for days and months," without interfering in the country's internal affairs, stressing that this may cause instability in the whole region.

"Why didn't Zaev attack (Albanian PM) Rama and (Kosovo President) Thaci, but Vucic? He is not as naive as to not know that the concept of a Greater Albania is not complete without Skopje," Dacic underlined in a statement sent to Tanjug.

According to the Serbian minister, as Macedonian citizens have the right to freely choose their leadership, not even countries that are much stronger and bigger than Macedonia will decide whom Serbian citizens elect, nor will much greater leaders than Zaev do that.

"Serbia has been sincere toward Macedonia, recognized it under its constitutional name, although offending Greece with that, never uttered a single word of interference in its internal affairs, while Macedonia recognized Kosovo, voted against Serbia in UNESCO, and now its candidate for prime minister brutally insults the Serbian leadership and the convincingly elected president Vucic," Dacic said.

"The only thing missing is for them to adopt a resolution on the Serbian genocide against Albanians," he added.

Cabinet minister and Movement of Socialists leader Aleksandar Vulin also reacted to Zaev's statement, wondering whether he came up with the attack on Vucic by himself - or if he was told to do it by "Rama, Thaci, or Xhaferi."