US Senator John McCain says he and Serbian PM Aleksandar Vucic on Monday spoke about two world wars starting "in the region of Eastern Europe."

US Senator John McCain says he and Serbian PM Aleksandar Vucic on Monday spoke about two world wars starting "in the region of Eastern Europe." 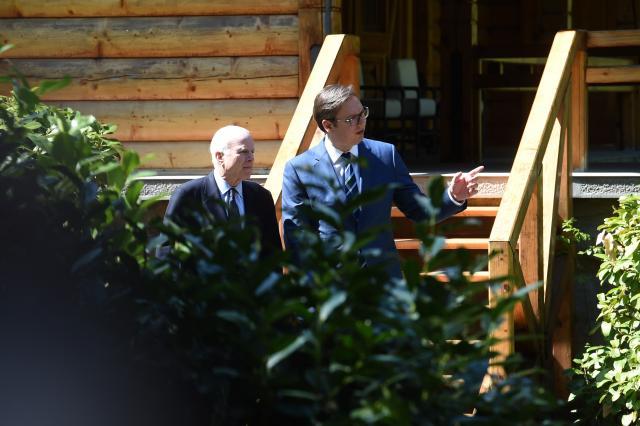 He said that upon returning to the US, he would tell his colleagues in the Senat, "the president, and the American people" that everything happening in Eastern Europe is "of vital importance for US national security."

He congratulated Vucic on his recent victory in Serbia's presidential elections, and on "economic reforms and progress on the path toward the EU," saying that he looks forward to working with Vucic in order to make progress andd enable Serbia to join the EU, because Serbia is a force for reconciliation in Eastern Europe."

McCain said he was optimistic about the importance of Serbia's integration into the EU becoming "crystallized" over time, but added that he was "worried because of Russia's behavior in the region and the attempt to overthrow the government in neighboring Montenegro."

Another place where the US senator sees Russia's "clear involvement" is the conflict in Syria, adding that he hoped "this kind" of behavior by Syria would stop - "and it's clear that it happed in cooperation with Russia."

McCain said he and Vucic also spoke about the importance of the Belgrade-Pristina dialogue under EU's auspices, where progress has ben made "thanks to President Tomislav Nikolic and PM Aleksandar Vucic," and added that the US was "Serbia's most active military partner" taking up about 90 percent of such activities.

McCain also thanked Serbia for participating in the "anti-IS coalition," and for being "one of America's most active partners in joint exercises."

As a former pilot, the US official took the opportunity to offer his condolences to the families of two Serbian pilots who died on Friday when a military jet trainer crashed.

While in Belgrade today, McCain, who chairs the US Senate Committee on Armed Services, attended a training between Serbia's elite SAJ police unit, a detachment of the U.S. Special Operations Command and a military unit from Slovenia, Reuters reported.

Asked to comment on the recent alleged chemical attack in Syria, he said that he "believes" the Russians knew about chemical weapons in Syria, and that his country will show them that "this kind of war crimes is unacceptable."

"We will train those who are fighting against Syrian President Bashar al-Assad. First, the Russians should be banned from taking off from the areas from which these attacks were carried out, then it is necessary to hold peace talks so that Assad and (Russian President Vladimir) Putin understand that they cannot win in this battlefield," McCain has been quoted as saying.

The US senator's trip to Belgrade is part of his tour of the Western Balkans.