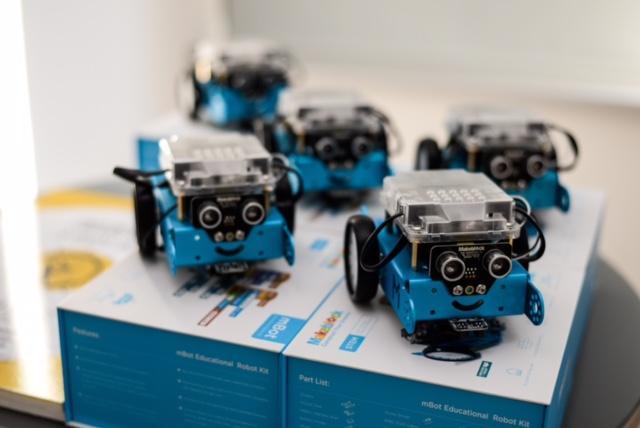 The campaign's goal is to, with the support of donors, provide each primary school in Serbia with these modern teaching tools that will help primary school students (5th to 8th grade) learn the basics of programming and coding.

Minister of State Administration and Local Self Government Ana Brnabic thanked Fund B92 for this initiative and expressed her satisfaction that the ministry, with the support of UNDP, managed to secure donations to all schools that have registered but have up to this point been on the waiting list.

"We listen and we are open to suggestions coming from organizations and businesses. This is one of those examples when we all mobilize to do something for all of us. I hope that in the future there will be a lot more of these events that speak for themselves. In thank teachers for the initiative, who have proved themselves to be real professionals. This is the right way to change Serbia and go into the digital transformation," said Brnabic.

The Ministry of Education, Science and Technological Development has also supported the campaign, because its concept fits into the plan to make informatics a compulsory subject in schools.

"The entire campaign has shown that the battle for knowledge and desire for knowledge exist and we would like to thank all the good people and companies who have also donated," said Minister Mladen Sarcevic.

Since the beginning of the campaign, Fund B92, with the support of several dozen socially responsible companies and individuals, provided five mBot robots for 131 schools each, after which the funding was secured for all the other schools with the e supported of the Ministry of State Administration and Local Self-Government.

Fund B92 Board of Directors President Veran Matic said on this occasion: "The results of all this will be visible very soon, all these schools and their teams will soon start to compete. In June we will organize the grand finale, we will know how robots have been used, and what this education means."

Teachers and media representatives were welcomed also by Deputy Resident UNDP Representative in Serbia Steliana Nedera, director of the Science-Technology Park Gordana Danilovic Grkovic, and director of the Center for Promotion of Science Nemanja Djordjevic, whose organization also supported "Battle for Knowledge."

In this phase of the campaign, the teacher training has been enabled by the Ministry of Trade, Tourism and Telecommunications.

Minister Brnabic handed out the robots at the Science and Technology Park to teachers from 40 Belgrade schools, who also attended professional development training in order to be able to use these tools in the classroom. Training for teachers from schools in other cities in Serbia is already in full swing, and will be completed next week.

All schools that have not applied for participation will be able to do so during a competition that will be announced before the start of the next school year.

Speaking about the future of this project, Veran Matic said:

"We can say that this is, in a way, a revolutionary project, as we will in a short period of time provide the robots and the training of teachers to all the schools that want it, so that by the end of the year there will be the possibility of large competitive league in mBot programming across Serbia."

"Since I believe that we will be able to obtain sufficient resources so that all primary schools have an opportunity to learn using these robots, this is also an opportunity to announce that we will try as soon as possible to introduce the micro: bit devices into schools. This will be the evolution of the campaign with robots, because this project, backed by the BBC, Microsoft, Samsung, the British Council and others, arose from the desire to make programming maximally facilitated, but also accessible to all because the price of the device is very low. The BBC in Britain has handed out one device to each seventh grader, other countries such as the Netherlands, Norway and Iceland have also introduced this device as a teaching tool in schools. I hope that we, too, will be able to in June hand out micro:bits to all the schools that have been involved in Battle of Knowledge so far - of course along with teacher training, but also start raising funds for the purchase of micro:bits for all schools in Serbia."

"We certainly owe gratitude to the Institute for the Development and Innovation of Young People from Zagreb who gave us the complete know-how, the project model, but also the teacher training, the use of their teaching clips, as well as a donation made by the owner of the Institute, philanthropist Nenad Bakic, who donated the first 200 robots for schools in Serbia, after a successful implementation of the project through the Croatian Makers" he said.

It is clear that only by making very large investments in education a serious step forward can be made, he continued - "especially in the field covered by STEM, because all education systems in the region are deficient when it comes to these modern educational programs."

Coding languages ​​and programming, through encounters of students from the region, can represent new communication bridges in a completely different, a positive code compared to those used previously, and which brought with them hate speech and intolerance, Matic said.

I think the synergy that we have created in Fund B92, by including businesspeople, ministries, research institutions and experts that are educating teachers into the campaign - is a winning combination for creating an even wider coalition for even higher goals. Obviously it is necessary to raise the level of quality of the equipment and digital classrooms in all primary and secondary schools, universities, expand the capacity of educational profiles that are already in deficit, while prediction are that in 2020 Europe will be short of at least 800,000 developers. This is exactly a task for Europe, to, via such specific projects, integrate the Western Balkan countries, with each other, and within the EU," Matic concluded.