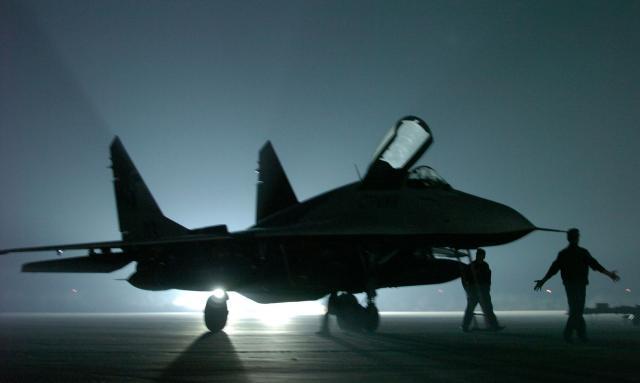 The MiGs will land at the military airport in Batajnica at the end of the month. The handover ceremony will be attended by Russian Defense Minister Sergei Shoigu, the newspaper writes, and adds that "the details of the arrival of the MiGs" are not published officially for the time being.

According to the article, two possibilities are under consideration.

"The option of the MiGs flying directly from Russia to Serbia is being considered. That has not been quite confirmed yet, because it would also have a delicate political note. One of the ideas is to, in this case, have the planes salute Serbia by flying vertically across its entire territory. The other option is to deliver the aircraft aboard Russian transport planes, most likely Ilyushins," an unnamed source from top military circles has been quoted as saying.

Shoigu's visit, meanwhile, "will be a chance for the two countries to agree all the technical details of the agreement, and lay out their future military cooperation."

The daily writes that Russian experts will take active part in the overhaul of the warplanes, that will be carried out in Batajnica.

"The package agreed by Belgrade and Moscow, worth EUR 185, includes six working and operative MiG-29s, and the delivery of missiles and a set of parts. It will include spare engines, tools, and other accompanying sets sufficient to cover the next 15 years. The arrangement also means that a special hangar will be built, along with a covering along the runway," a government source has been quoted as saying.

Thanks to the deal, Serbian leadership's plan to have ten fighter jets "always on stand-by to defend the country's airspace" will come to fruition, the paper said.