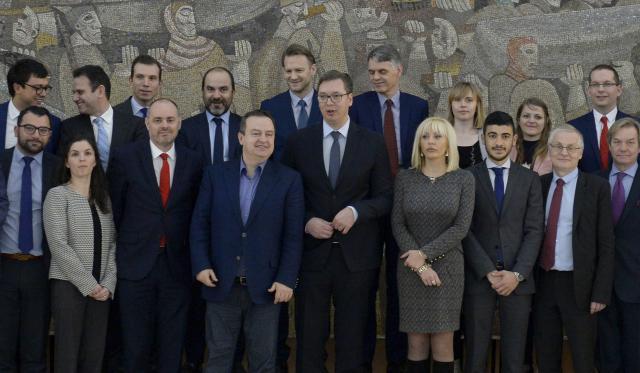 According to him, the presence of COELA ambassadors was "proof of the commitment of the EU to the enlargement process." He said he wished that the participants of the meeting leave Belgrade "with clear answers to all their questions."

"Serbia is on its European path, because we think that we belong to this type of society, we would like to join the countries who believe in democracy, entrepreneurship, human rights, even though I know that there will always be a lot of complaints and demands on our behavior," the prime minister said.

Vucic said that he hopes regional stability will be preserved in the Western Balkans, the lack of which he sees as the biggest obstacle to future economic development and progress.

"We invested a lot of effort to maintain peace and stability, and we will continue with that policy, although often not everything is up to us and I hope that others will take care of their political moves in a reasonable way, that we will have greater certainty in the region," said Vucic, stressing that he sees the region as "a new source of European growth."

"Ahead of us are the obstacles of unresolved political issues of the past, and the region can make progress only if we turn to the future," he said.

Vucic stressed that he is worried the most about the situation in Bosnia-Herzegovina, and said he was convinced Serbia played "a very constructive role" and hoped that "the court quarrels" between the two countries would end and that they would as soon as possible turn to joint projects.

According to him, "there are a lot of big ideas about new railways, highways that will connect countries and citizens, and contribute to the development of their economies."

He said that, at the same time, "there are things with which he is not satisfied," pointing primarily to the inefficiency of the judicial system.

Ahead of Serbia, as he points out, is a lot of work, "but the hardest part of the road has been passed."

He noted the recently opened two new (EU negotiations) chapters, one of which has also been closed.

Vucic told EU's representatives that "Serbia finds chapter 35 on Kosovo to be the most difficult one," and that the country "remains committed to EU membership."

The prime minister said that it was not always easy to convince citizens of the "European story" - because the public "from time to time sees the EU as a kind of machine that exerts a lot of pressure on us because of Kosovo, which has always been the biggest issue for the EU in our region."

"Perhaps it was my mistake and that of my colleagues that we did not promote more a number of things the EU has done for Serbia, especially around donations and investments, which are not comparable with those from other countries," he said.

"From time to time citizens, justly, see that the EU is using its power to exert more pressure on Serbia. I don't wan to complain or cry in front of you, because we know that the accession process is not easy, and it wasn't for other countries, either. However, unlike others, we have chapter 35, which is linked to all other chapters," Vucic said.

The prime minister pointed out that Serbia has done a lot in this area, but it is faced with "some stupid issues on which there has been insistence."

"Thus the story around the bridge in Kosovska Mitrovica was the dumbest I'd ever heard. We did our job and we managed to solve this issue, too. However, they did not want to see the results, and transferred it to another level, with the explanation that it did not concern the state of Serbia, but was a a question for the local level," explained the prime minister.