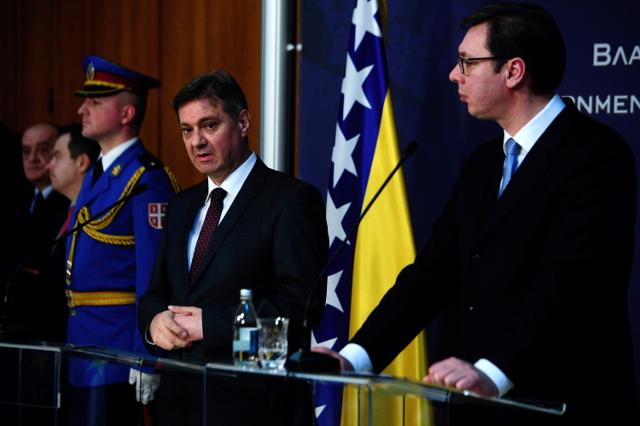 "If someone fears that political conflicts that could end up even worse will continue - Serbia will do its best to turn the path in the opposite direction, and for our countries to cooperate in the best possible way," Vucic said.

He added that the meeting with Zvizdic also touched on relations in the region, while there is "clear economic cooperation" that is growing each year.

"We spoke about concrete and important issues, starting with succession, to demarcation. There's four points on which we have not reached agreement, but our teams will soon meet to continue talking about that," Vucic said.

He stressed that he supports the territorial integrity and sovereignty of Bosnia-Herzegovina.

"It is our vital interest to bring people closer together, that they understand we can make progress only through stability and peace, to be able to secure deeper wallets for people," said Vucic.

Zvizdic arrived here on Sunday and was officially welcomed in a ceremony in front of the Palace of Serbia on Monday morning.

Vucic said his meeting with Zvizdic today covered "many important topics, the mutual support on the European road" but also "very concretely the topic of setting up a team for the maintenance of the 11 bridges between Serbia and Bosnia-Herzegovina."

Vucic announced he would go to a fair organized in the town of Mostar, where he has been invited by Zvizdic," but also by (Croat representative in the presidency of Bosnia-Herzegovina) Dragan Covic," where a special meeting of defense industry representatives of the two countries will take place.

"That's good news, we can sell ammunition and weapons to others, of course, nobody's even thinking about using it here, but to sell it to others, that could be a big and important deal," the Serbia prime minister said.

Zvizdic confirmed the importance of the agreement on the modernization of the railway, and expressed hope that the final route will be determined very quickly.

According to Zvizdic, cited by the Serbian government, "after that we will invite the creditors to implement this extremely important project."

He also said that authorities of Bosnia and Herzegovina are "working actively on the case of the July 2015 attack on Vucic in Potocari."

"Those working on this have full support and we demand and expect that the case be solved as soon as possible, and that those involved in the incident - which cast a shadow on our relations and our welcome at the time - be found," Zvizdic said, Tanjug reported.