PM "lost trust in Pristina," not optimistic ahead of talks

Prime Minister Aleksandar Vucic said on Monday that he has "lost his trust in Pristina" and that for this reason, the dialogue in Brussels will be "difficult."

PM "lost trust in Pristina," not optimistic ahead of talks

Prime Minister Aleksandar Vucic said on Monday that he has "lost his trust in Pristina" and that for this reason, the dialogue in Brussels will be "difficult." 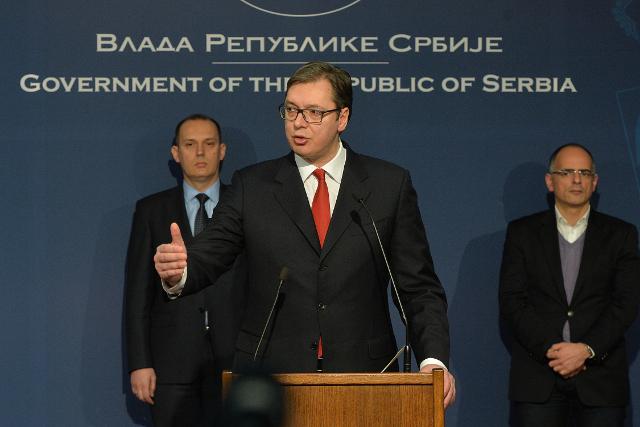 "I want to ask EU officials not to support the bringing of tools and weapons where they don't belong," he said, in apparent reference to the incidents earlier in the month surrounding a train traveling from Belgrade to northern Kosovo, and added: "Everything else, all other topics, will happen some other time."

He also advised Pristina "not to play with tools and weapons."

And while the negotiations will be "difficult due to the loss of trust," it is "important to secure peace, stability and safety for the Serbs in Kosovo and Metohija."

"I don't expect too much from tomorrow's meeting, but I expect the situation to calm down, and clear messages... we have difficult discussions ahead, and any result we achieve is good," Vucic said, according to Beta.

On Sunday, Vucic held a news conference at the government HQ in Belgrade to announce that dialogue with Pristina would be continued in Brussels on January 24.

Vucic also said that the meeting would be attended by Serbian President Tomislav Nikolic.

Vucic "expressed hope that the upcoming talks in Brussels will be sufficiently rational, as to bringing weapons in an environment where the majority Serbs lives in Kosovo, stressing that it is important for Serbia to avoid conflicts and provocations," the Serbian government said on its website.

Vucic said he was confident that the talks would be successful, and "stressed that he will invest a lot of effort and work that in order to provide an economically secure future for the citizens of Serbia."

After meetings with EU High Representative for Foreign and Security Policy Federica Mogherini and German Chancellor Angela Merkel in Davos, he continued, "the situation in the Western Balkans has calmed down."

The upcoming talks in Brussels "will not be easy" Vucic remarked, as the discussion "starts from two opposing premises – that Kosovo is independent and that is part of Serbia."

According to Vucic, "there was much talk about the train from Belgrade to Kosovska Mitrovica, but no one paid attention to 17 armoured vehicles and special units ROSU, clean up of ethnic Albanians in northern Kosovo-Metohija."

He "explained that the Brussels agreement stipulates that the police units in the north of Kosovo-Metohija must be made in accordance with the ethnic composition and that the same applies to special units," the Serbian government said, quoting him also as adding that he was "happy that the conflict was avoided, although some wanted to provoke it."

On Friday, Serbian Foreign Minister Ivica Dacic told Russia's Sputnik that Belgrade expected the establishment of the Community of Serbian Municipalities (ZSO) to be on the negotiating table with Pristina in the next round of talks, and that Serbian officials would insist on that, Beta has reported.

"Serbia is always for dialogue as that is the only way to reduce tensions. That is why it is useful that Brussels, too, got involved when PM Aleksandar Vucic spoke with Federica Mogherini in Davos and that the next round of the Belgrade-Pristina dialogue has been scheduled for as early as January 24," Dacic told said.

Serbia last week informed all relevant international actors of the provocations by Pristina and the latest developments surrounding the case of the stopping of a Kosovska Mitrovica-bound train from Belgrade.

"We have informed everyone of Pristina's latest provocations, and of what Serbia has done to preserve peace," Dacic told Tanjug on Friday.